My first impression of Arisia was one of sartorial richness, stirred together with equal parts of humor, history, literary allusion, and performing arts. The non-stop schedule of movies, panels, gaming sessions, readings, parties and demonstrations got lost in the spectacle of costumed attendees swarming randomly around three levels of the hotel, and visible from any number of perspectives along the balustrades of the atrium. Out of this dizzying scene the iconic image of this con, for me, was that of a black-clad woman with blonde dreadlocks, jacked up on really tall stilts, and moving hazily across the rippling lobby carpet while slashing playfully at people with her foot-long razor nails. 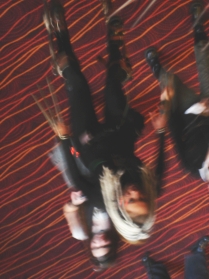 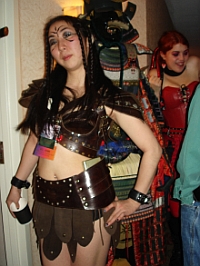 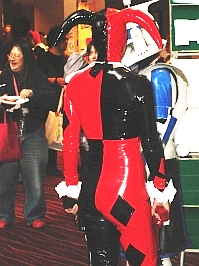 Probably the most creative gang were the retrofuturepunk rocket troops, decked out in a combination of jumpsuits, Sky Captain gear, and terrific pressure tank backpacks that sprouted tubes, gauges, and exotically useless stylizations. How cool that I found a livejournal link to their own photoset too! 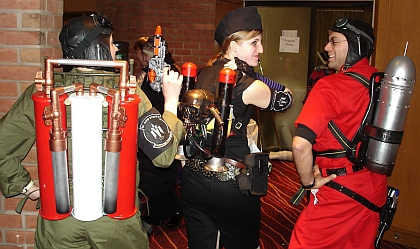 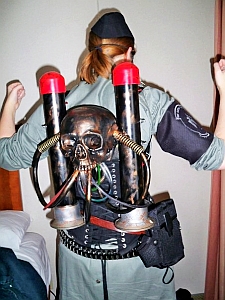 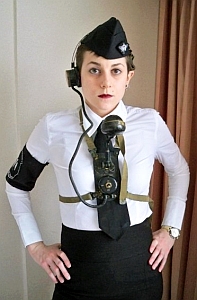 Of the few panel sessions that I was able to attend, the session on Copyright, Theory and Practice was the standout on Friday night, in which the panelists held forth on whether or not copyright law is entirely broken, and what is likely to happen in the future. Most panelists seemed to agree that, like it or not, the ease with which digital copies can be disseminated over the Internet has completely changed the ball game. From Richard Stallman‘s point of view that is an undeniably good thing, since the proliferation of knowledge and easy access to it for all is an engine of self-empowerment and democritization. From Stallman’s point of view, it is not the idea of copyright that is broken, but rather the current idea of intellectual property which is bankrupt.

The problem seems to stem from the degree to which rights of ownership can be asserted over the creative arts; whether they be performances on stage and screen, or fruits of the mind such as literary works, inventions, even abstract ideas. Can someone really OWN the idea of a mouse-click? Or own the identity a particular white-gloved Mouse? When it comes to musical recordings, the studios that owned the distribution rights have sold us copies as LPs, then as Cassettes, then as CDs, and now want to sell us the same music as digital files. Despite the fact that us consumers may have only been buying a limited use license, it was much easier to ignore the complications when our rights were tied to physical objects (like used LPs or books) that we could sell at a yard sale or on eBay. But now that digital files can be zapped anywhere, and can be discovered or sent out en masse with technologies like napster or bit-torrent, the act of piracy enters new and strange territory. Indeed the Internet has become the open sea - swarming with the King’s navy, privateers, and scurvy pirates - and whomever gets the goods buries the treasure!

Just because it is obvious to us (that is to say the ordinary consumer of information objects) that the jig is up, that the RIAA have hung themselves by their own petard, doesn’t mean that the enforcers of unenforceable patents and copyrights are going to roll over and play dead. Moderator, Alan Wexelblat, pointed out that RIAA makes a living out of creating targets and going after them for their clients; there is no likelihood whatsoever of them giving up their single purpose in life, no matter how ridiculous and evil it seems in light of present circumstances. Regardless of whether we want to grab the latest work of a blockbuster artist, to nibble at the long tail of minor players and unknowns, or even to scour the Inter-waves for long lost orphans that nobody cares about, there has got to be a better way. Panelist Traina seemed to think that fixing the existing copyright statutes was the way to go, while Stallman had a more radical proposal: let people pirate anything at all, but place a tax on media and medium, which funds will be redistributed to all the artists. This idea had an interesting wrinkle: don’t pay out based on percentages of total downloads (which of course would be a total hand-out to “big” name artists), but to calculate distributions as the cube root of downloads! In this way even the mega-names would only get ten times more than the intrepid nobody at the end of the long tail. Brilliant, really! So go buy a gnu. 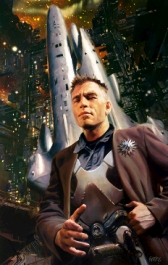 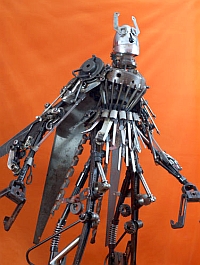 The artistic highlights of Arisia 2009 were definitely the display of hand-welded robots, by Skunkadelia, and the GOH talks by Dave Seeley. Skunk really pulled out all the stops. He set up a gang of the scruffiest, sleekest, shiny-est, grimey-est, half lit, half drunk, junkyard robots you will ever see! Like they just walked out of your grand-dad’s garage and took off in rocket’s blast for Burning Man. These robots are cool! And Dave Seeley gave two long, excellent talks. One was a recap of his career as an artist, and the other was a step-by-step discussion of how he creates his superb images.

Probably the most fun linked series of panels was on Designing a Science Fiction Work. This was split into four, hour-long, brainstorms, for building a world, framing a story, creating the characters, and roughing out the visual concept. Both the writer GOH, Walter H. Hunt, and artist GOH, Dave Seeley, participated in most of these sessions, along with writer Peter Prellwitz. The open discussions were sometimes wandering, sometimes witty, and always had to be rounded up within an hour deadline. These are fun!

On Saturday, the Making Tropes Interesting panel first surveyed the audience for their favorite SF and Fantasy tropes, then discussed how they themselves evaluated and refashioned such tropes in their own work. Barry Longyear was adamant about not thinking about tropes to begin with, not trying to consciously differentiate his own writing from previous works by over-analyzing their themes. This left the panel in basically two camps: those who totally embraced the idea of premeditated trope-tweaking, and those (Longyear) who said “let the story rip” without so much parsing before hand.

Managed to catch three film features during the con: Full Metal Alchemist, Westworld, and Bamboo Saucer. Definitely the Bamboo Saucer showing was my favorite! Not only does the story revolve around two clandestine teams (one American, one Russian) who infiltrate the People’s Republic of China to search for a flying saucer…but the Russian and Chinese characters actually have dialogue in their own languages. I was thrilled! A corny SF movie in three languages, all of which I can understand, what a total riot! Bamboo Saucer is surprisingly well done, considering it’s B-Movie status, but it is full of random hilariousness.

In one scene, the US commander confronts the Russian commander after taking away the machine gun that the Russian was using to shoot at everyone. Once he has retrieved his own pistol, the American points it at the Russian and snarls: “I oughtta shoot your treacherous head off!“

Other amusement: when the US fighter pilot is trying to get to know the hot blonde Russian translator, she indignantly tells him that Russian women are not just hausfraus, that her own work is centered on “super heterodyne feedback determinations.“ The pilot says that if she’s just like a man, then maybe she is packing a weapon under her jumpsuit. “Aren’t you going to search me?” she sneers, putting up her hands. As the pilot takes his time frisking her, he says: “Are you sure Russian women are no different from Russian men?”

Later on, when the team has managed to enter the saucer, there ensues a hilarious scene with the pilot and translator squashed up against the control panel together, supposedly due to the UFOs internal gravitational field. Their absurd pantomime of reaching for the button together — it takes both their strength apparently as she holds onto his index finger — would even have Sigmund Freud giggling in his sleeve. But really the best part of this forgotten film is when they have taken off in the space ship with the only other survivor of a battle with the PLA troops, and fly off at the “speed of light” into space on a crash course with Saturn. Their ensuing struggle to regain control of the ship by punching in all the possible permutations of four numbers is juicy stuff. 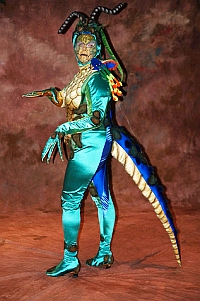 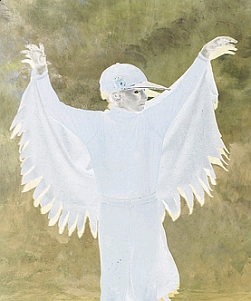 The last panel I was able to attend was on secret societies, an interesting topic to be sure. The panelists included a freemason (Mark Justin Waks), a member of both Golden Dawn and OTO (Adrianne Brennan), and a vampire fiction publisher (Innana Arthen). Although there were some interesting points made about the nature of secret societies and the individuals that make them up, the conversation always seemed on the edge of something potentially fascinating but never quite getting there. Was it because the best “known” secret societies are the freemasons and the Illuminati? Or because the insularity of secret societies themselves prevent us from seeing how they really operate in the world at large? Arthen’s comments were the most interesting to me, placing the context of her work in progress in the milieu of the American 1950s, when secret societies and political activism were actually more prevalent than we would normally assume, considering the paranoid cold-war and anti-communist fervor of the McCarthyist times.

But, I must say I did not much care for the idea of secret societies of vampires, preserving their knowledge for the eternity of undead initiates. Except for some random mentions of Skull and Bones, nobody even cared to mention the elites that rule the world, such as the Bilderbergs, secret governments, disinformation operatives, and energy cartels. To these one might presume to have mentioned the Papadiabolis’ clan in R. A. Lafferty’s Devil is Dead, if we really wanted to get to the meat of the matter; for are there not, walking among us (or at least zipping overhead in private planes), a genuine breed of vampires, sucking out our organs (Bug Jack Barron), beating down our resistance (1984), and breeding us to be proper slaves (Brave New World)?

Anyway, who needs “conspiracy” theories when we have the New York Times as a newspaper of public record, a rag populated with drivel concocted by the fools behind Total Information Awareness?