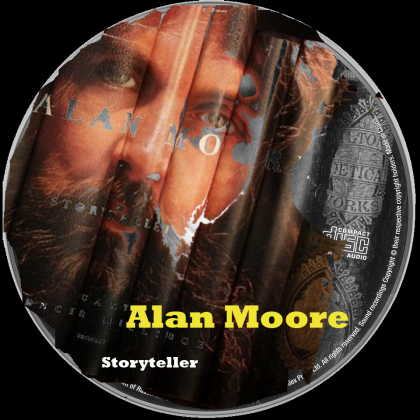 It was pleasant to be the first person to check out Widener’s copy of _Alan Moore, Storyteller_, the new hardcover biography by Gary Spencer Millidge.  Before the shiny crisp pages of Moore’s interesting comics have been pawed over and collected layers of fingerprints and crumbs, I was able to turn them and learn some more details about Moore’s  life.

Was it interesting to grow up in the Boroughs section of a grimy industrial town?  To be thrown out of high school and get blacklisted from ordinary employment?  Well, if you end up realizing exactly the sort of bean-counting mechanistic life that others end up with; and you end up transforming an entire art form, as well as transforming oneself into a practicing shaman and a fire-breathing dragon of wisdom, then:  yes.

Yes, it is interesting.

This book has some information about Moore, though it sounded very familiar, as if much of it was transcribed from the biographical film, The Mindscape of Alan Moore.    If you are interested in a chronological journey through Alan Moore’s career in comics, this is the book for you, as it is peppered with Moore’s early pages as a comics artist, as well as comics that influenced him, and selections from his own classics, such as V for Vendetta and the Watchmen.

For me, it is curious to see that whomsoever approaches him — whether from comics, or from popular religion, or from social commentary — none can resist mentioning that Moore has chosen to worship his own deity:  the 2nd Century snake-headed Glycon!    Yes, all roads DO lead to Glycon, my friends!   And yet, there is an impish aspect to Moore’s selection of this tow-headed “rock and roll” pagan god, which you can see in his eyes.   After all, for the shaman that Moore has become, the choice of a god is a declaration of independence from the ligatures that bind people to corrupt, so-called “established,”  religions.   Though there is a bit of narcissism involved, (like the design of personal shrines  in John Brunner’s Jagged Orbit,) Moore sets an important precedent for those of us who refuse to be bound into the chains of meaningless traditions.   Evidently, we must all pass through the same seven veils and cross the same ring of fire to find our unique spiritual paths.