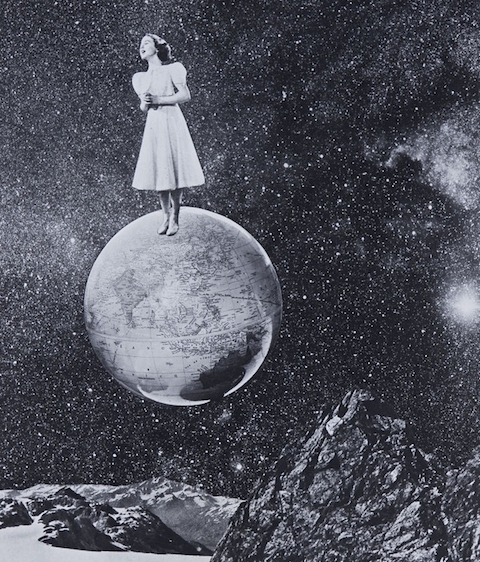 Reading Jennifer Szalai’s article on Dwight MacDonald’s _Masscult and Midcult_ in this week’s Nation, gave me pause to reflect on that seemingly outmoded way of characterizing the tension between high culture (the art of museums and mid-town cinematheques) and the kibble for the rest of us low-lifes, otherwise known as kitsch.

When I first encountered MacDonald’s book (in the mid-70s), there still seemed to be an impermeable wall of broadcast television and “mainstream” publishers between the zines of the samidzat press and the greater public.  Although a visit to Silver Scarab Press seemed incredibly important to me, to the outside world it was just Harry O’s basement in Albuquerque, and didn’t mean a damn thing to the churning presses of Random House in New York City.  From an objective point of view, midcult certainly seemed to be reigning triumphant!  But from my point of view, it was the hard-scrabble avant-garde who were the only worthy contributors to and creators of culture.

The clarity of my position was both reinforced and at the same time shattered when I moved to New York City on 1978, and  found myself in a cultural battle zone — Sid Vicious would barely outlive the Sex Pistols, but the night scene was a mind-numbing cacophony of voices: the Plasmatics, the Talking Heads, the Ramones, the Specials, the Lounge Lizards, John Shirley’s Obsession.  As fast as the record labels could buy and co-opt the rebellious new wave, another wave of furious, almost insanely self-destructive performers hurled themselves onto the ramparts.  Following them were a new generation of fans, who transmitted streams of punk news through any and all channels.   As much as I couldn’t actually stand listening to these punks and their continuous howl of mindless rage, they did validate my own state of war with the brainwashing of the establishment’s media.

Through the punks, and the community of zines that followed them, one could feel a vibrant strain of resistance in the low culture, which became passionate form of self-expression.   “Low-brow” visual culture began to gain a huge momentum of it’s own, resurrecting it’s heroes (Robert Williams, Ed Big Daddy Roth, R. Crumb, Panter…), and invigorating galleries with loud works that were formerly consigned to motorcycle tanks and concrete abutments.

In the 80s, a strange new “religion” of absurdist, surrealist rebellion — the Book of the SubGenius — appeared in the humor sections of major book chains.    How could the mid-cult myopia of the publishers and distributors have predicted the generation of slackers to follow the arrival of that momentous tome!   Slack, as we know from the pipe-clenching sage, Bob Dobbs, is not at all about slacking off from the patriarchy’s expectations, but rather is to instantly melt all connections to the patriarchy by transmuting oneself into a laughing Mandelbrot set of ectoplasm.

In other words, with the SubGenius we moved beyond the problem of master-slave, or capital-labor, to transcendental igneous differentiation.

Was it all a hoax?   More importantly, does it matter? 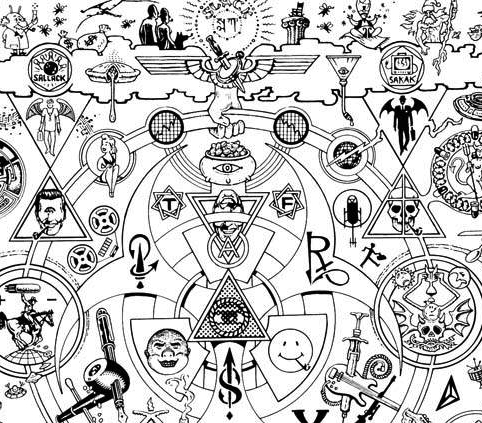 If we consider our current cultural landscape (or shatter-scape, with its myriad of conflicting and inter-related paradigms,) we are still very much embedded in the high-cult, mid-cult, mass-cult matrix.  Even though art museums have begun to embrace formerly low-brow culture, and there are books on underground comix and kitsch from such presses as Abrams and Taschen, nonetheless there is ample room for the denigration of the entire society by such tasteless and horrible spectacles as the trend for “reality television.”   Not to mention the debasement of journalism to point that a channel like Fox “news” can exist without being stripped of its broadcast license, while the extremely right-wing CNN, or the phony left-wing NPR can pretend to be presenting more “objective” information.

In this scenario, it is no wonder that “alternative” sources of information are far more reliable.  We are living in a war zone of continuous psy-ops.  Should you have any doubt about this, try to accommodate the reality of “corporate citizenship” with $7.7 Trillion that vanished into the maw of FIRE, while non-violent students sitting on a sidewalk are pepper-sprayed directly in the face, and the entire #OWS movement is characterized as a few smelly hippies and homeless people.   The same people running these billion-dollar psy-op boondoggles, hidden among cubicles around the beltway like so many little Wizards of Oz, would have you believe that United States of America needs to live in a state of constant fear, thus making all citizens willing guinea pigs in their experiment to have us strip ourselves and expose our genitals to frequent blasts of body-scanning radiation.   Even in the like-minded enclave of Europe, this degree of insanity is considered beyond the pale and the so-called “full body scan” devices have been banned.

Under these circumstances, it is incumbent upon any sane human being to rebel.

Of course, the persistent mythology of the mid-cult is that there will be a benign outcome, and that our government, as bad as it is, cannot be actually evil, taken over by by gangs of criminals, torturers, lunatics, and space aliens.   Should you carry on in your own cubicle?  Surround yourself with amulets and prayers and personalized lucky shrines, as weird as anything in Brunner’s _Jagged Orbit_?  Because after all, what can you really do?

Perhaps Bob Dobbs was right…  the best choice is slack.   It is then heartwarming to see the success of the _Idler’s Glossary _and the follow-up volume, the _Wage Slave’s Glossary_, in which the essence of slack is conveyed in the seemingly innocent format of a list of words and definitions.   It’s worth listening to the interview with co-author Mark Kingwell, for some of his take on the terms, such as “wage slave” which was:

“popularized by the Lowell mill girls, though the term is bit older.   The idea is that you have a job, but you are enslaved to the conditions of your own labor because you have to have that wage to live.  It’s rooted in Marxist analysis of labour and consumption.  And the idea is that you can’t get out from under, because in a classic situation, you have to buy your supplies at the company store, so the wages the company pays you are channeled right back into the company.  You may not be a chattel slave, in the ancient sense, in that you are physically owned by the company or by a person, but you’re enslaved by these conditions.  At the time there was a lively debate between socialists and anarchists, socialists wanted to improve working conditions through unionization and collective bargaining, and arnarchists wanted to say, look, it’s this whole idea of work that needs to be put into question.  And the more you cooperate with management, the more you perpetuate the system.”

This is straight out of Kropotkin, if I’m not mistaken.  Then Kingwell compares idler with slacker:

“There is a distinction between the idler and the slacker.  the slacker is someone who is self-consciously avoiding work, as a result the slacker is still bound by dictates of work as something that he or she is avoiding.  The idler, by contrast, is taking time and striking out in a whole new direction of personal preference and self development.”

The beauty of the “idler,” in Kingwell’s definition, is the rejection of the entire working paradigm.   There is a not so subtle sub-text which is the obvious suggestion that anarchism is really the solution.

On the other, hand, I would take issue with the usage of “idler” and “slacker” here, because I believe that there ought to be some leeway in the term “slacker” which can include the anarchistic bent of Bob Dobb’s “slack” and which is both creative and completely free of any dictates of work.   But that is quibbling.

Even more amusing is to listen to co-author Joshua Glenn’s interview with Michael Dresser, in which the host shows himself to be so utterly ossified and extinct (he wants to vote for a John Wayne - Fonzie ticket in the Presidential election) that Glenn’s entire radical objective sails cleanly over his head.

So, drop away the seven veils, cast off your chains, and RISE UP as a free human being.   Then DIY, amigos!