Mastodon Are you a werewolf, or not? Who can say... | Yunchtime 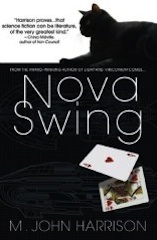 Having just finished a riveting gothic fantasy novel about werewolves by Tanith Lee, it occurs to me that moral ambiguity is the core theme of the books I have been reading lately.  In _Lycanthia_, Lee portrays the vagueries of a consumptive city-dweller, a self-involved pianist, who comes into a large country manor in the “old country” by way of an inheritance.   His reluctant arrival to take possession of the family manor house, and his petulant mood swings in dealing with the superstitious locals, provide the perfect backdrop for his eventual crisis.

The appearance of large wolf-like dogs, and warnings about a nefarious family, the de Lagenay’s, hiding in the forest, draw the unwitting anti-hero, perhaps fittingly named Christian, into a web of conflicts that quickly begins to resonate with emotional depth.  The ambiguity of all the surface facts -   are the de Lagenays really werewolves?  are the superstitious villagers good or evil?  is the doctor saving his life or condemning him to fate worse than death? is the upright piano an instrument of beauty or torture?  — serve to heighten the tension as Christian becomes ever-more-tightly entwined with the de Lagenays, whom he variously insults, assaults, loves, worships, honors and betrays.

The interesting aspects of this novel by Lee are hard to enumerate.   There is a three-way bisexual love affair, that is dealt with very tastefully.  There were moments when I was reminded of the other-worldly love affair in C. L. Moore’s _Shambleau_, but Lee’s handling of the affair is much more sensitive.   On the other hand, there is a brutal rape and murder that is utterly senseless.   The murder victim, a young housemaid, had been forcefully raped by Christian the night of her murder… which is a point in the book when one almost wants to toss it aside… and yet, this is pivot point where the real moral questioning begins.  And the realistic lashing out of the main character, who mindlessly tries to hand a bundle silver objects to the chambermaid’s relatives at her funeral, is both painful and bizarre.  Later on, that silver, which at the funeral the peasant drops and flees from in terror, gets neatly reintroduced into the narrative.  And it is the richness of these details, together with the psychological veracity of the major characters, that makes it impossible to stop turning the pages.  Indeed, the climax and ending of the book are a series of self-repudiations that take one’s breath away…not so much for the moral bankruptcy of Christian, but for the effortless prose that has whisked us from the banality of Christian’s past life into a veritable frenzy of witchcraft and necromancy.   Tanith Lee churns out irresistable metaphors the way a sushi chef slices fish.  Go read this book, it’s a delight.

Lycanthia fell off the shelf into my hands, just as I was putting away _Nova Swing_, by M. John Harrison.   This is another book that challenges the reader with a cast of very un-loveable, twisted characters who seem to be caught in a time warp of morally ambiguous attitudes.   The very nature of the world where the story takes place is hard to pin down, as it is intruded upon by an aureole that connects to the Event Zone, which is a very strange place indeed.

Like the “zone” of Andrei Tarkovsky’s film, _The Stalker_, or the orbiting space platform in Tarkovsky’s _Solaris_, any person who ventures beyond the aureole will find that reality is warped and that their experience itself cannot be trusted.  The guides who return to such places have major roles in Nova Swing, two of whom appear to be physically deteriorating, while a third seems to have neither heart nor mind, judging from his callous behaviour.  Does he care about the women he is with?  Does he even notice them?   And then there are the “police,” who we would suspect are trying to capture a serial killer, and to find out why alien artifacts are taking human form among the nightclubs of the city.   But as it becomes increasingly apparent that the senior detective’s obsession with his late wife has an ever-creepier edge to it, and the “chopped” assistant, with her super-powers and cyber-biological data feeds, is not altogether rational, the moral ambiguity of the novel seems to be too dense.

Nova Swing leaves us nowhere to turn for air or sanity or common ground.  Everyone is a certified mental case, and the streaming hordes of pure black and white cats that flow along the streets for no particular reason become the only symbol of normality in an otherwise absolutely desperate scene full of wasted, drunken louts.   On these rocks, the book comes dangerously close to that point of exhasperation when the reader must hurl it against the wall and be done with it.   Nonetheless, the bizarre realm of the Kefahuchi Tract, with it’s biological tank cultivars, and its entrancing hyper-advanced technologies kept me hanging on.

In the first book of this series, Light, I was much closer to tossing the book aside.  Indeed, I recall a major author who mentioned that he did, in fact, hurl Light into the garbage when it became obvious that the serial killer in that book was not going to stop, nor was he going to have to deal with his crimes emotionally.   That was pretty disgusting.   But in Nova Swing, fortunately, that serial killer motif is muted, and Harrison spends more time conjuring up the strangest of scenes, scenes that would make R. A. Lafferty wrinkle his brow both entranced and confused.    All in all, I’d say that Nova Swing was stylistically captivating, and in certain passages poetic even perhaps brilliant, but as a novel I’d say it was rather too nebulous for the average reader to engage with.   Me?  I’ve been reading M. John’s stuff since the early days of Tegeus Chromis and the _Centauri Device_.   And I’m certainly looking foward to the next Kefahuchi Tract novel.

A month or two before reading Nova Swing, I also happened to rip through a book called _Sensation_ by Nick Mamatas.   This book got rave reviews as a ground-breaking SF novel.   I must say that it left me utterly disappointed.   The main character is a narcissistic and indecisive hipster professor in New York, who somehow gets involved with a group of anarchists.   The SF conceit of the plot is that the violent and bizarre actions of the anarchists are manifestations of a secret war between parasitic wasp and spider beings that have infiltrated humankind.   This supposed war between these insectoid masters is presumably a sort of fencing match between the Illuminati (the spiders) and the Ninja Underground (the wasps), and is responsible for everything from surrealism, to assassinations, to that yucky sandwich you had for lunch.   The biggest problem for me with this book was that the only dramatic tension in it seemed to be found in the juxtaposition of the everyday boring solicitude towards the professor and his rotten love-life and the “war” between the wasps and spiders.   Why must the reader try to decode a stupid diary entry by a mediocre character, in order to understand the “deep” story?   This smacks of pretentiousness.   Read it at your own risk.   But if you like the moral ambiguity of a city dweller who does not know whether to get a bagel with lox or go have sex with a woman who doesn’t even like him, then you might be fascinated.