Mastodon The Sacrifice of the Worker to the Banks | Yunchtime 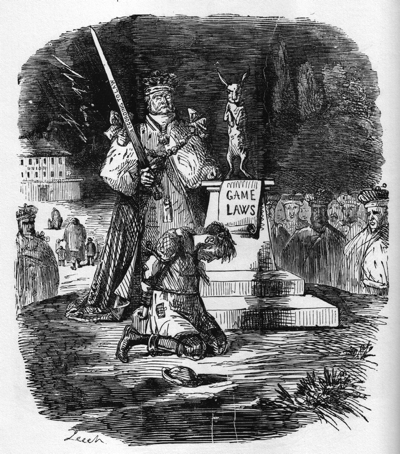 Browsing through Great Drawings and Illustrations from Punch, I was quite taken by the powerful image from 1844 called: “The Game Laws; or the sacrifice of the Peasant to the Hare.” The image of a scrawny rabbit on a pedestal, glaring with new found power down at the bound peasant on his knees is eerie; while the pompous aristocrat, bearing a sword emblazoned ‘according to law’ is either preparing to strike off the peasant’s head or to give him clemency…his disinterest in the outcome being completely obvious.

The Game Laws (introduced in 1670) were designed to make sure that only the land-owning aristocracy had the right to hunt. This of course meant that the landless peasants, made homeless by the enclosure acts, and starved due to lack of work, were subject the cruel reality of knowing that the game they could catch and eat was forbidden to them and ran freely over hill and dale, while the privileged class sat stuffing themselves on sweetmeats in their manor houses.

It seems to me a striking metaphor for the obscene disparity of wealth in America today. Since the laborers of the U.S.A. do not own land, or condos, or beach houses, or McMansions, they have little opportunity to hunt or farm for food in any form. The role of a game animal has been replaced by the ability of the worker to obtain food money. But the über-rich — with their billions in assets — grow ever richer, while the families sliding into poverty who have lost their jobs, their homes, and probably their minds, can only watch the preposterous fantasies of “winners” foisted upon them in the media. We need only to change the vengeful rabbit into an apparatchik banker in the act of foreclosing on the unfortunate worker’s home, to have our modern parallel. While that dirty business is done, the fat cat investment bankers, the brokers, and all the avaricious swine who invented and then profited from mega-bubbles of toxic derivatives and bundled ARM mortgages, swagger past with a glance at their 23-diamond movement ROLEX to see if they have time for golf before going to their feel-good charity banquet. As if they could care about those 50 million people living below the poverty line! Hmm, where’s the cajones in this society! Isn’t it time for some payback for the wretched Bushes and Cheneys and Kochs?

Anyway, the artist who created the original Game Laws image was John Leech (1817-1864), who was forced to make a living as an artist when his father’s London coffee house did not succeed. He studied medicine and followed his anatomical sketches with illustrations for magazines, such as Punch. Although he died at the young age of 47, he left us some memorable images of injustice and a raft more of humorous ones; for these I send a grateful thank you to his spirit!

An interesting piece on Leech can also be found in the Century Illustrated, page numbers 553-565, which is available in Google Books.