In June, I read the strange news of F. Gwynplaine MacIntyre’s apparent suicide, and followed a link on Making Light to a presumed autobiographical sketch. It told a story of incredible suffering, poverty, and eventual escape from an orphanage in Australia and from abusive relatives. Although there has been a torrent of speculation about the strange odyssey of “Froggy” MacIntyre, as he was known to his friends, the straight depiction of those childhood details struck me as utterly true and made me curious about his other writings. 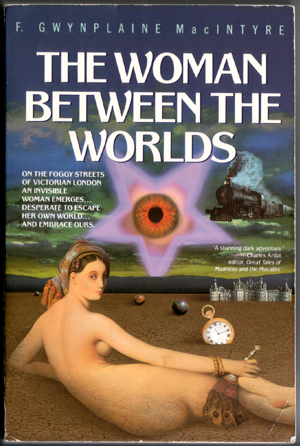 I picked up a copy of Woman Between the Worlds, which is told in a very pedestrian early 20th century tone — a style reminiscent of Arthur Conan Doyle — but which packs unexpected scenarios of pure surrealism and perhaps even psychosis. The painted enamel teeth of a partially tattooed invisible woman, which appear like the grin of the Cheshire cat, floating above her nude body that seems to be missing hands and feet and other asymmetrical parts of her anatomy! An unspeakably evil being — the Dreadful Eye — which inhabits corpses or other conglomerations of once-living organic matter, that reappears with P. K. Dickian determination to devour the souls and spirits of the living! The Dreadful Eye, attempting to drive the protagonist mad, forms mouths, eyes, ears in the flesh of the hero, traveling up and down his limbs, while speaking to him and taunting him to give up! Some of this is really strange stuff.

And yet, the book is also full of amusing caricatures and jokes. The Order of the Golden Dawn, including Aleister Crowley, provide a backdrop to adventures in London, where the characters are never so exhausted from fighting off hordes of invisible fiends that they cannot deliver a ridiculous one-liner. Even as the climactic mystery of the Dreadful Eye is being explained, Froggy can’t be swayed from humor:

“We came out in quite a different world; much more alien than this planet. It was the place where nightmares come from: hundreds of ‘em, all different sizes and shapes, all swarming and clawing all over one another, and all of them chattering and jabbering at the top of their voices all at once.”

“I have visited that place,” said Crowley, solemnly. “You are describing the railway buffet at Clapham junction.”

After chapters full of deadly fighting, and with the prospect of having to face off thousands of invisible cannibals, this sort of riposte manages to keep a strangely light-hearted spin on Froggy’s tale.

I can only hope that more details will emerge about the weird and tortured author who managed to turn his own personal horror and bizarre gallows humor into such vivid writing. 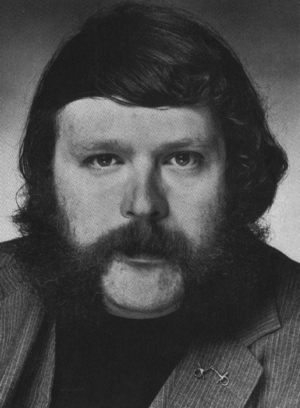