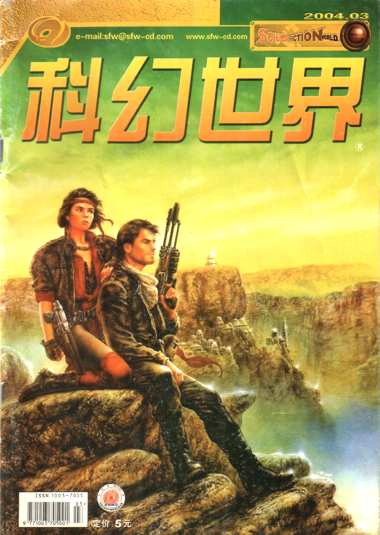 Trouble at China’s largest (okay, the world’s largest) circulation SF magazine, where the editors have united to publish an “Open Letter of protest” against the editor in chief.

China’s largest science fiction magazine Science Fiction World, has recently become wracked by infighting. On March 21, the magazine’s entire editorial staff published an open letter on the Internet accusing the publication’s editor-in-chief, Li Chang, of various offenses and seeking his removal from office.  Yesterday, it was learned from relevant channels that the unit in charge of  Science Fiction World (the Sichuan Province Science and Technology Association) has dispatched a team to investigate the sitation.

The open letter claims to be written under the “duress of the last banner that can be raised before Science Fiction World ceases to exist.”  Among the accusations leveled at Li Chang were that after taking office he dropped relations with various authors and instead forced the magazine editors to write the stories themselves; he then demanded that the foreign language editors take on the task of translations into Chinese; and went so far as to make the art editors create the illustrations instead of hiring artists.  Also, for example, he interfered with the advertising to the point of replacing the magazine’s cover with an advertisement for a school.

After some further inquiries it was found that all of the circumstances described in the open letter actually happened.  The current director of Zongheng Net (Chinese Literature website), nicknamed “Shuoshuren,” was formerly an editor on the staff of Science Fiction World.  Yesterday, when interviewed, he revealed that the situation at Science Fiction World is dire, and that the circulation as fallen by 20,000 back to the level it was at 10 years ago.  “The boss became such a cheapskate that it’s now impossible for the editorial department to treat the authors fairly even though they want to.  And I’ve also heard that recently Science Fiction World abolished a number of internal management regulations.”

Of course, it is also possible that the current explosion of the editorial collective is due to disagreements over pay.  According to our findings, under the management of previous editor-in-chiefs, compensation for editors was linked to performance, with some editors being able to earn a few thousand RMB per month.  But since Li Chang took over, the link to performance was abolished and even as the tasks such as writing stories, translation, and illustration were added onto their other editorial duties, pay was capped at 1000 RMB per month.

In comparison to the outrage of the editors, the magazine’s readers are clearly more concerned about the quality problems of Science Fiction World.  One reader, Ms. Zhu, responded that compared to a few years ago Science Fiction World is getting worse and worse.  “Some of the frequently seen famous writers from before are absent, while the quality of new works by some unknown writers is not remarkable at all, and seems more like pseudo-science farce. It’s all very disappointing.”

Yesterday we managed to contact a long-running author in the pages of Science Fiction World who wished to remain anonymous.  That author told us that it had already been many months since he had any requests for stories from the magazine, and when he tried to call the editors himself, they stalled for time as if they were hiding something.  “When I looked at the recent issues of the magazine, it seemed that some of their stories are really questionable, with some basic points that are obviously unscientific, and which could really mislead the readers.  I don’t want to give you my name now, just in case the magazine asks me for a manuscript, because I’m still willing to write for them.”

and:  Magazine Editor Under Fire

Note:  some sources in Chinese use the figure of 200,000 drop in circulation (ershi wan), not 20,000 (er wan) as written in the CCTV article.  I’m assuming that the lower figure is correct.