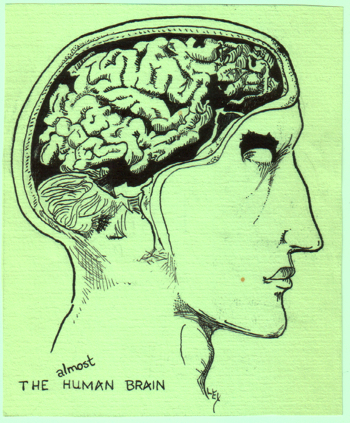 Reading a fascinating conversation between Fred Pohl and Alfred Bester, that took place in Newcastle upon Tyne, 26 June 1978, (published in Rob Jackson’s Inca 5), and was amused by their comments on John Campbell during his Dianetics phase. Right after that they had a brief exchange on a psychological study of SF writers:

Alfred Bester: What is cyclothymia?

Fred Pohl: It’s a kind of lunacy. But the question was not whether you had it, but if you had it which way you would go. Withdrawn cyclothymic people are more or less passive and tend to let things go, and overlook something that is wrong. The people who tend the other way are stubborn and won’t take nothing from nobody, and have their own opinions which you’re not going to change with an axe! And science fiction writers were like that – the stubbornest, most difficult human beings alive!

This dialog reminded me of a joke piece that I wrote for CusFussing in 1979 called Science Fiction Brains. You can see the published illustration for that article above. I distinctly remember drawing it on a scrap of greenish colored bond paper that I found somebody’s office in Phoenix that summer. But never before published is a related sketch (complete with characteristic coffee stain), and an explanation of the “lobes of the brain,” which was probably the idea behind the story if the first place. Somehow the explanation of the lobes got lost in both the inked version of the sketch and the story. But here it is, for posterity. 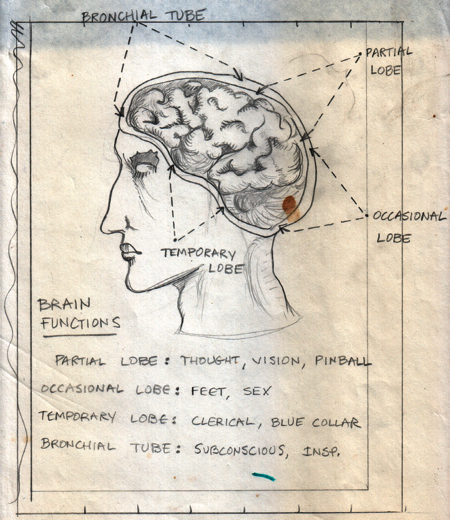