Mastodon The Dark Knight: apologia for Dictatorship or Insanity, take your pick | Yunchtime 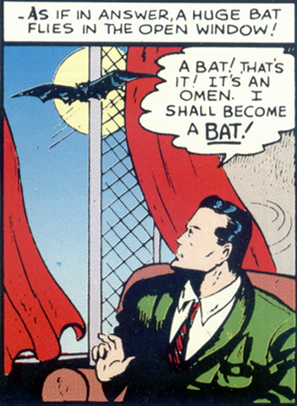 If you haven’t yet seen the film, Dark Knight, please do that first before reading this post, because you will definitely spoil the “tension” of the plot, assuming there is any. For some reason this film is a runaway hit, with critics pissing all over themselves to outpraise each other. From my perspective, despite some excellent cinematography and a stellar performance by Heath Ledger as the Joker, it is really just another Batman movie, but with a troubling dichotomy at its core that is getting scant attention. There are clearly two very conflicted subtexts in the film, one centered on Batman and the other on the Joker. Batman’s supposed internal conflict we are all familiar with — having to take the law into his own hands in order to fight evil — dating back to his first appearance in Detective Comics #37; on the other hand, unlike the ridiculous slapstick Joker that Burton and Nicholson gave us, Ledger pushes his exploration of the Joker’s mercurial psychology into whole new realms of uncharted territory.

The original Batman, as portrayed in the late 30s and early 40s by Bob Kane, was straight out of the pulp-avenger style. He wouldn’t think twice about killing his enemies or beating them to a pulp. It was only the “shiny happy” policy of DC comics that scrubbed him into a clean, ethical do-gooder during the 50s and early 60s. The renascence of Batman as a grim, internally conflicted, and merciless vigilante occurred several times, including a stint in the 60s under the hands of Denny O’Neill and Neal Adams, and more famously in the 80s Dark Knight series by Frank Miller. The entire current raft of Batman films sprang from Tim Burton’s adaption of the Dark Knight, and has been thrashing vapidly around on the screen like a shark trying to jump itself ever since.

In any case, the point is that this Batman, the Dark Knight, is supposedly a portrayal of Bruce Wayne’s internal struggle to be noble and good, and at the same time to sacrifice his image to public opinion in order to fight the bad guys. There are a series of overt references in the current film about Batman’s need to do whatever has to be done in order to fight the total insanity of terrorism. Is it just me, or are there other concurrent examples of this self-justification? Examples which, in the name of fighting terrorism, the supposed good-guys commit acts of mayhem and destruction and even try to justify the use of human torture… In short, do we really need this sort of sickening apologia in a bloody Batman movie, or is it just par for the course? Of course nobody even bothers to notice this fact embedded in the film, even though it weighs the entire story down like the Rock of Gibraltar on top of Batman’s emotionless head.

You know, when it comes to the original Batman by Bob Kane, he was just slugging it out with some scumbags and breaking their necks every now and then. He wasn’t buddy buddy with the police commissioner in those days, he was considered a criminal and thug. Only after three decades of smiley-face sanitizing by the editors of D.C. comics did the Batman & Gordon fighting for the good of Gotham City come about; but in our current episode we now have the conflated mess of not only the original outlaw Batman, but also his square-jawed do-gooder personality, and his various fascistic Dark Knight outbursts, along with his mood-swings of self doubt. The fact that this complicated persona is portrayed by Christian Bale with all the panache of a corpse slowly entering rigor mortis does not help to unwind the tangle.

Indeed there are only two humane acts that take place in the entire film, neither of them by Batman.

First, and foremost, when the hardened criminal says: “I’m going to do what you should have done ten minutes ago,” and hurls the detonator out of the ship’s window, he proves not only that he is not a monster and is able to think clearly about the meaning of human life, but also that he is brave enough to act on it, unlike everyone else around him. Even though he is shackled in handcuffs, he still does the right thing. This by the way, is supposed to somehow contrast the middle class fool on the other ship, who has convinced himself that his own ulcer and mortgage are more important than hundreds of other human lives and yet, when he picks up the detonator key, he is too much of a chickenshit to act on his own convictions. This is some kind of ethics?

Which forces us to be utterly sympathetic to the Joker, when he sees that the midnight hour has arrived without either ship having been destroyed, and laments: “must I do everything myself?” But herein lies the basic conflict of the two characters — Batman thinks that the acts of the people on the ships, who choose not to blow up the other ship, is evidence of the humanity that still prevails in Gotham City, while the Joker merely considers the result to be a fluke, since the result could have gone one way or another. The truth seems to be rather more on the Joker’s side considering that only the insubordination of a prisoner, the lack of resolution of those in charge, combined with an overwhelmingly selfish and callous public who were in the end spineless to carry out their own majority decision is what saved the day. Hooray for the righteousness of the pathetic and beaten down sheep! It is driven home, again and again, that it is not the Batman who has been reading his Nietzsche, but the Joker.

The second humane act of the film is committed by the butler Arthur, when he burns the good-bye letter from Rachel. This is supposedly some sort of sacrifice of the truth to save Bruce Wayne from torment. We presume that Arthur is motivated to do this so that Wayne will carry on with his fascist mission of self-righteous bullshit, and not be distracted by the sad but unnecessary fact that Rachel dumped his violent pathologies in favor of the rich lawyer.

When it comes to the rich lawyer himself, we are treated to his simultaneous moral and physical devolution into savagery. Perhaps we might have suspected this could happen, since he deliberately kidnapped a paranoid schizophrenic in order to torture him with his own hands, only to be supposedly saved on the precipice by Batman. How is it that Batman appears at his shoulder, like Jiminy Cricket, at that critical moment for the lawyer Dent, but cannot somehow provide the same service for himself? Nonetheless, when Dent realizes that half of his face is burnt off into a hideous CGI graphic (guaranteed to give your children ten years of nightmares and a xanax addiction), and then writhes against his bonds when the Joker visits his hospital bed, he rather easily turns over to the dark side. In this case we can only conclude that Pavlov and Skinner were right, society is to blame for everything! Unlike the kharma that Jeanne Moreau suffers at the end of Vadim’s _Les Liasons Dangerouses_, Dent is not scarred as a consequence of his actions, his scars become the catalyst of his actions. Look what society did to me! Look! Now I am above your stupid laws! This message is the subliminal beat-down that viewers of this movie must endure.

The very same message is repeated in the various “explanations” that the Joker gives for his scarred face. Always the victim of nasty sadistic acts, the Joker has clearly gone over a different boundary into pure insanity. Ledger’s Joker is spectacular. His tics, his posture, his sheer enjoyment of total chaos, is a tour-de-force achievement, which plunges me into both despair and sadness. Despair, because, when compared with the milquetoast macho idiot, Batman, there is no question that the Joker’s persona will become totemic for an entire new generation of lost youth. This is something worthy of despair, and yet Hollywood, with is cynical greed, will continue to churn out zombies, slashers, maniacs galore, and even give mountains of cash to utterly talentless hacks like M Night Shyamalan on the mere chance that he can put a chill up the spine of some people who think that his snail-paced nausea is scary. Shyamalan’s works are certainly a nightmare of mediocrity, but let us get back to the sadness of Ledger’s Joker. The sadness, the deep sadness, I feel while watching this amazing performance unfold is to know that Ledger is already gone… Not even thirty! We could have seen him take on films, one after another, and watch in rapt amazement for an entire generation. But now he’s gone and I find that terribly sad.

Still, we do have this bizarre gem. Ledger’s Joker is scintillating, sinister, and yet almost pure in his objective: chaos. He has no use for thirty million dollars - “Everything burns!” he says, while lighting a small mountain of cash on fire. This strikes me as somehow utterly true. Trusting the current U.S. executive branch of government is exactly the same. Everything burns. Where can we possibly go after Iraq? Iran? Paris? Paraguay? Everything burns!!

What Ledger is giving us in the Joker, is not the corn-fed platitudes and ridiculous posturing of Batman, Gordon, and Dent, he is giving us the real deal, the bonafide disaster that our so called leaders have strewn across the planet. Therefore when the Joker is ridiculing his tormentors and captors by saying there is nothing they can do to him, we realize that he is speaking the truth. When self-justifying fascists crush all their opponents and establish dictatorships, and then proceed to destroy anyone who challenges them, their victims will someday be stripped down to nothing but their own breath, their existence, their consciousness of what is being done to them… and they will rebel.

Unfortunately, the American audience just sucks all this up without a moment of awareness. As far as the majority are concerned, the words of the usher who showed us where the emergency exits were located are sufficient: “this flick is awesome, it rules!” But under the surface, I would assert that America is being given a choice of ideologies: either a fascist dictatorship or insanity. Some choice. I reject this completely in favor of another way, namely the rule of law, of habaeus corpus, of the protections guaranteed by the Constitution and Bill of Rights, and by the principle of absolutely nobody being above the law. The law, however, seems to be the problem for us. Enabling as it does such sickening swine as Bush, Cheney, and all the Enrons, Halliburtons, Blackwaters, Wackenhuts, Dyncorps, Lockheeds, and Dr. Strangeloves — it is the law that needs some restoration. Let us go back to citizens having rights instead of corporations. Then none of us need to become our own Batmans. Then none of us need to become our own Jokers. Needless to say, when the lot of us are pushed to the wall, all bets are off.