Mastodon Readercon 24, Where did we go from here? | Yunchtime

Last year at Readercon, there was an emotional dust-up over a sordid harassment incident, in addition to a scary and unexpected medical emergency for one of our favorite editors. At this year’s Readercon, we were spared this additional drama, and found ourselves sailing through a very mellow and enjoyable con. 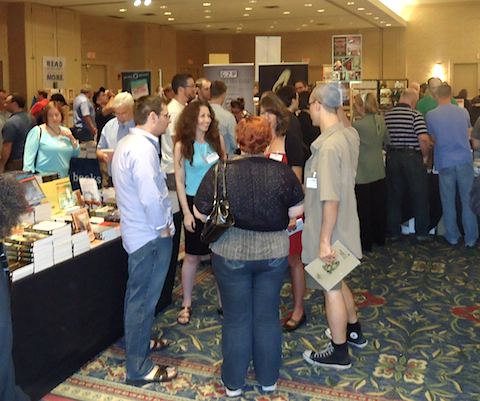 Of course, it was great to catch up with other fans and pros, like Alan Hanscomb, who finished his novel _Sharon of Two Salems_, and Mark Borok, Dianne Weinstein, and the whole Readercon gang; and also great to make some new acquaintances, like some writer named Seamus who was wearing a little black straw fedora, and a couple of mathematics and linguistics-loving commedia dell’arte performers.

Most surprising for me perhaps, was to hijack a moment of John Shirley’s time, reminiscing about his gigs at CBGBs back in 1980, where I saw him stripped to the waist and flailing around like a maniac singing “_I am electricity!“   Now that was a memorable night.  Probably Shirley will scratch his head and wonder just who the heck I am and how I knew him well enough to be on the guest list… but I was gracious enough not to mention in public some of the other crazy shit that we both witnessed in Greenwich Village back then.    Like Mickey Mouse as the sorcerer’s apprentice, those were some nutty times…   _

So where did we go from here?    Yes, the panel sessions.

Writing Others: Theory     The session was not on how to write about aliens from outer space as others, but the more nuanced socio-cultural others of our human society, such as getting into the heads of people not of the same race, same gender, sexual orientation, or social demographic group as ourselves.    Andrea Hairston looked at this from the perspective of the theatre and acting, in which there is a journey from the self to the other, or a conjuring of “other” characters from within.   She mentioned that in her book, _Mindscape_, the characters were explicitly written to be contained within the spheres of their own world views, and that the interaction of these spheres was at the core of the novel.   But some readers complained, she said, that her character Luanda, a black woman physicist, talked in a sort of black English, that they didn’t find to be credible.   Later she tried to tone down the black English. “Not that I’m trying to sell millions of books,” Hairston said, “but I would like a few readers.”

Sabrina Vourvoulias wondered “Why are we writing to a default white audience?”

“If we are going to get away from that default white setting,” Rose Lemberg said, “then have to figure out how intersectional characters - of mixed, multi-level backgrounds, races, genders personalities - can appeal to our readers.   For example, can aliens based on non-human biology be the only gender-neutral characters that we refer to with non-binary (male-female) pronouns?   We will need to de-colonize our perspectives, even from historical contexts, to get to this point of complex intersectional others.”

Joan Slonczewski added, “My French Muslim math genius also got heavily criticized as being somehow out of sync with the normal French cultural context.   So you are damned if you do, damned if you don’t.”

The panel spent some time discussing the use or the avoidance of foreign languages in their English language stories, the general conclusion of which seemed to be that using phrases and terms in other languages as a way of developing otherness in a character can offer multiple levels of connection with the reader, but has to be used in a way that is authentic to a native speaker of the language in question.     Hairston:  ”Sometimes when a character speaks in German, it is because what he’s saying can only be properly said and clearly understood in German”

But Daniel José Older added a caution.  Some words must definitely NOT be set apart in italics to emphasize their otherness, if in fact they are deeply embedded in a multilingual culture.   “You can’t italicize a natively used term regardless of the original language, for example “I went to the supermercado,” because it is not actually being said in a foreign language.”

What the Future Is, and What the Future Is Not   This panel rambled vaguely around futurist issues, such as the degree to which human gestures or brain waves will be able to connect directly with electronic devices.   John Shirley mentioned his book, _Song Called Youth_, in which performers — connected by wires to audio synthesizers — used their entire bodies as musical instruments.   He said that when he edited the book for a new edition he converted the wires to wireless connections to try to keep up with the times.

John Crowley mentioned a pamphlet that he discovered on the “Future of Theatre,” which predicted a stage framed by large abstract colored projections controlled by the movements of actors or dancers.    At the end of this imaginary “future” performance, the audience was then led out past a series of booths set up by various charities, and the premise was that the entire show was designed to soothe the audience and manipulate their mood so that they would be moved to make donations.

The conversation then, predictably enough, turned to robots.  ”How long until machines can say, “I,” Crowley wondered.    ”Well if you call a major corporation today you will get a robotic voice asking  how can I help you, so the machine self-referenced _I_ already exists,” Shirley replied.  ”There is not sentience there, so I guess the upside is that you can be abusive and swear at them when they bother you with a bunch of useless information you don’t need.”

Bud Sparkhawk pointed out:  ”the future of robots will not result in a huge clanking, anthropomorphic machine that mimics our own actions.  Rather it will manifest itself in ubiquitous automation of countless devices all around us, each with a specific function, and these will respond to human or semi-automated commands triggered by RFIDs or chips that we carry with us, possibly even chips implanted in our bodies.   We will be interacting with all these devices 24/7.”

Glenn Grant turned the discussion to machines “replacing” humans in various tasks, in overly optimistic terms; a position that John Shirley questioned, wondering if automatons might eventually replace — and simultaneously devalue! — human labor.    Grant admitted that recent history has already shown that American society is not up to dealing with such high levels of disruption — the off-shoring of countless manufacturing jobs — in a way that has acceptable consequences to the displaced workers.

John Crowley mentioned that one outcome of the disparity of wealth and lack of jobs has been the emergence of small scale artisanal businesses, like vineyards in Vermont, or speciality vegetables grown in local greenhouses.   He expressed hope that if a truly dismal collapse of civilization occurs that those crafts and trades being revived by the local artisans, gardeners, and DIY advocates would be able to transfer to the displaced masses.   “But when you get down to it,” Crowley said, “there is no such thing as the future.    Our forecasting just creates parables (either good or bad) that try to reset the terms of where we are heading.”

There was some discussion of global climate change and it’s possible effects — pocket utopias for the elites, and great swathes of humanity living on the edge of survival or extinction.  Shirley said there is always the risk of an Orwellian future, but that is why people need to push back.

For some reason this discussion was completely inadequate for one audience member, who identified himself as a Silicon Valley engineer.   He said that, as an engineer, working in the context of corporations and laboratories, he sees the future being built every day.  A future of devices, such as smartphones, such as video call-enabled televisions, and a host of other biometric or human-sensory augmenting devices.   In the questioner’s opinion, both the panelists, and the larger sphere of science fiction writers were ignoring this looming future and not dealing with it in their works.   In addition, he said that there is no question of an Orwellian future, because we are living in a surveillance state today where everything we say, write or do will be recorded, and the only question is who will have access to the recordings.

The panelists began to disagree, but before I could clearly make out what their positions were, the audience member angrily told them that “you people don’t know anything about the future!” and stormed out of the room.   “I guess we’ll see you, in the future,”  Crowley said.

On the subject of how those new technologies get embedded into the context of the present day reality, Bud Sparhawk made an analogy:  ”When motion pictures came out, why did they put the projectors in the back of the audience?  Because movies were first overlaying, then displacing the theatre and the vaudeville stage, and those projectors merely were set up where the spotlights had been.   Similarly, why should the motor be in the front of the car?   Because that is where the horse used to be!”   Sparhawks’ comment struck me as quite important.

Regarding the outraged engineer’s comment — although I disagreed with both his auto-didactic point of view and behavior — I certainly do agree with his basic premise:  that we are currently living in a surveillance state.   But it seems to me, taking Sparhawk’s observation into account, that the acceleration and invasion of digital spying into all facets of our lives is merely another overlay of a new technology onto an existing function.   That function is the tendency of the security apparatus of our government, (well, no doubt ANY government,) to become paranoid and to seek all possible means to identify and eliminate dissent.

It doesn’t really matter if the media being spied upon are handwritten notes, or audio recordings, or digital indices, the pernicious aspect of the panopticon surveillance state is that some of our fellow citizens feel justified in spying on all the rest of us.    In their paranoid delusion, our society is safer collectively when a secret army of analysts infiltrate and destroy the privacy of the entire population on an individual basis, weeding out anyone that they suspect.   Indeed, it is that delusion, that ideology, that we must defeat!

For starters, we might look at the origins of the American surveillance state, and then figure out how sfnal futures can help us to shut it down forever.    Why not accept John Crowley’s wisdom, and set up our own parables to reset the rules of the game?   Storming out of the conversation is not going to solve anything, that much is obvious.