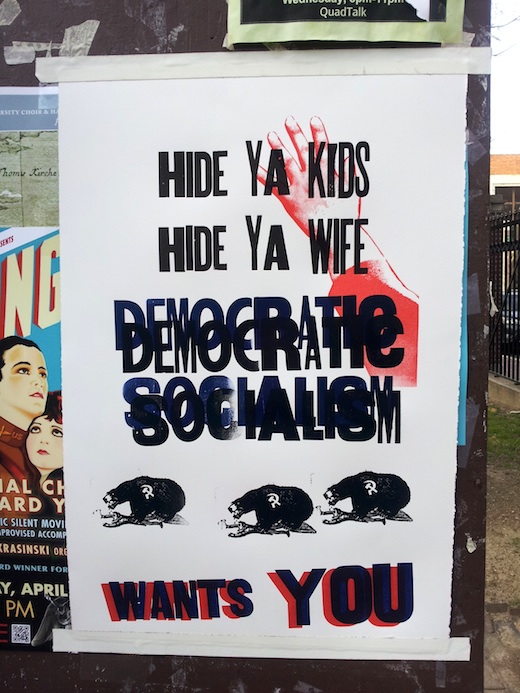 Just before the New York primary I noticed this sign posted on the Quincy Street billboard in Harvard Yard. This is directly across the street from entrance to the Harvard Art Museum, at the gate between Philosophy, Robinson and Sever Halls. It is a fairly good traffic spot in the mornings.

Whoever posted this has my kudos! It’s actually a pretty funny mash-up of the “Hide ya kids, hide yo wife” meme with the idiotic fear-mongering that has been going on about Bernie Sanders and the menace of “democratic socialism.” Making use of an old-fashioned image of the iconic Russian bear attacking and slavering on top of prone Uncle Sam is rather ridiculous… Bernie’s political life and positions have nothing to do with Russia or with Russia’s state planned socialism. Indeed, if Americans had any sense of reality whatsoever, they would realize that entire purpose of our Federal government and its institutions is socialist in nature. Assuming democracy actually exists here in the USA — which is seriously in doubt after the recent debacle in Las Vegas has revealed — then it is most certainly democratic socialism to begin with. Really, we could only be so lucky as to adopt the policies discussed by Michael Moore in Where to Invade Next, and be slightly more in tune with the times in order to enjoy the advantages that democratic social policies provide.

Of course, the “Wants You” slogan predicates the idea that this strange and monstrous thing — this democratic socialism thing — is simultaneously going to destroy your peace and security (thus Hide Ya Kids, Hide Ya Wife), and at the same time recruit you to join it. How insidious! The thing you fear will propagandize you into joining it. Pretty amusing! This is clearly a fun bit of agit-prop, deliberately messing with our “normal” brainwashing program, that is beamed at us 24 hours a day. Thanks for that chuckle, hermano! And I liked the silk-screening too. More of this!