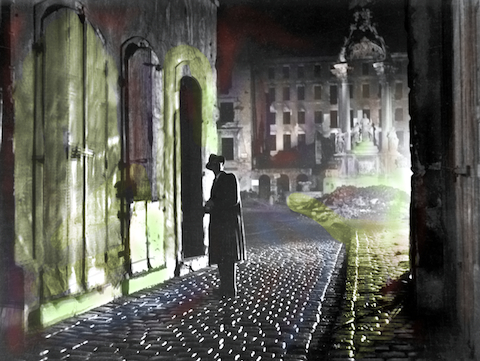 Just finished China Miéville’s _The City and the City_, a very satisfying, even inspiring, book, rich with metaphor and symbolism. It is like a film noir, set in a mythical Eastern European city — I’m convinced it is partly based on Prague — where populations living in mutually incompatible paradlgms “unsee“ each other.

The beauty of this idea is that, (quite beyond the metaphor,) it could be almost any *real* city; with populations that are utterly invisible to one another. Old and young, rich and poor, leftist and fascist, black and white: there are, in fact, far too many axes of unseeing in our everyday lives…

Miéville artfully teases out our curiosity and angst about how the *other half* live by embeddlng us in a murder mystery and then unravelllng the social and “grosstopical” threads that are interwoven across the two cities of the narrative.

Bes?el and Ul Qoma. The East European, Turkic, and Middle Eastern vibe of Miéville’s language is round, chewy, earthy; like loaves of hard black bread. The protagonist, Tyador Borlú comes to life primarily as a center of awareness by the way in which he is framed within the city-scape, by what he “unthinks” rather than what he thinks.

It is rare to read a new novel that works well on so many levels. I certainly have to congratulate China Miéville on this book: he is firing on all cylinders! What you have, in The City and the City, if you are willing to find it…is a science fiction novel that degausses itself into a paranoid fantasy; a mystery that unravels itself into a delusion; a psycho-geography that deconstructs itself into blueprints.

The pyscho-geography of these intertwined cities reminds me of the ‘psychetecture’ of Radiant City, where the main architect, Mister X, has become a sleepless madman, striving to correct the flaws of his own design. In Miéville’s Siamese-twin cities, our hero Borlú is pitted against not only a murderer and other unseen adversaries, but also against the very fabric of the built environment — made all the more diabolical because the actual process of “unseeing” the people, vehicles, and buildings all around him is a product of psychological conditioning more than anything else. As Borlú makes his way from one city perspective to another, his mental state becomes a reflection on the difference between his perceived point of view and his expected, socially conditioned point of view. At the same time he is always aware of an almost supernatural vagueness — the Breach — that asserts itself menacingly in between both viewpoints, and maintains a draconian enforcement over their separateness of being.

Despite this treacherously indeterminate landscape, Miéville manages to keep the story alive, and keeps us focused on the handful of characters as they navigate through seen and unseen streets. Sliding in the background of each scene, eliding each other in the semi-darkness of a foggy night, the false facades of the two cities are like stage props — think J. G. Ballard’s “Screen Game” in _Vermillion Sands_ — and the city (or the two cities, or is it the three…or _four…_cities!) all finally get resolved into a psychological projection onto three dimensional space.

Perhaps it is a false perception to think that there is more than a single city. Are we just playing mind games on ourselves, dividing our allegiance to shared space, and going so far as to actually live in compartmentalized ideologies? The irony, of course, is that Borlú keeps getting recruited to defend exactly the opposite of what he believes. It is not that he has switched sides, but that he has been absorbed into a deeper level of the looking glass. And like Alice, he can only nibble on the mushrooms and carry on!