Mastodon Reyes Cárdenas and the Moons of Mars | Yunchtime 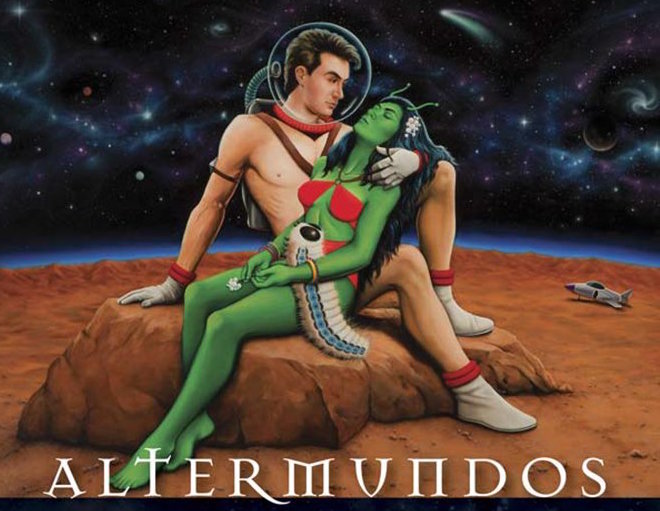 Recently I checked out a copy of Altermundos, [email protected] Speculative Literature and Popular Culture from the library. It contains many fascinating and important essays on the history and current state of [email protected] spec fic, and introduced me to the ground-breaking work of Gloria Anzaldúa, who wrote about nepantla (the in-betweenness of worlds) and those beings: nepantleras who traverse that no-man’s land.

Another author mentioned in the book was Reyes Cárdenas, a San Antonio poet and author of some short satirical science fiction poems called Los Pachucos y La Flying Saucer. For some reason this title appealed to me, and I strayed out of the proper feminista struggles represented in Altermundos into the sardonic poems of a macho, an eternal walker of el barrio, who spoke to me easily and in the very language of my own ill-spent youth in Albuquerque.

You young punks will not remember

when the pinto poets emerged

upon the scene machine,

the knives, the bullets of the words

they were shooting from the hip.

they turned into rhymes,

the iron bars that held raul

and his raza in the mind jail.

When the pinto poets looked in the mirror,

they didn’t see themselves —

they saw all of us!

Barefoot, stepping on goat heads, and riding bicycles for fifty miles in the relentless sun, there was probably a lot of my own experience that was shared with Reyes over in San Antonio; though to tell the truth I was a not only a double-outcast but a triple-outcast. I got shit not just from the Whites and the Mexicans. I got shit from the Gringos at Highland High, and the Chicanos from Martineztown, and Los Indios (who kicked me around for being a gringo). What saved me from being a quadruple-outcast, at Albuqueurque High, turned out to be the Mexican illegals who played on the soccer team. Those vatos were pretending to be teenagers with fake IDs, some of them in their mid-twenties, having crawled through barbed wire, swum through flash-flood arroyos, living on nothing but dreams and radioactive dust as they infiltrated the border and made their way to the South Valley. They were the only people as desperate and hungry as I was, and we knew by instinct that we were carnales.

Nobody ever thought that a white kid could be so poor, as he sat under a tree reading piles of books. But that didn’t stop them, paradoxically, from spitting on him for wearing ragged clothes full of holes bought at Salvation Army, or kicking him out of school because his hair was long and tangled. In those days of the early 1970s, Albuquerque was still in the throes of the late 60s, and the reactionary forces were in full swing. Buzz cuts and gangs were the standard social reality, whereas long dreadlocks had never been seen, forget about on the head of gringo punk Jew from Chicago walking down the halls of Jefferson Junior High School!

So yeah, when Reyes writes his stuff, it just flows with a normalcy that is uncanny in my brain.

Even though I escaped the Land of Enchantment and rambled — with nada que perder — all over the globe, still those days get burned forever into one’s psyche and subconscious. Like Reyes says:

in your own land once again!

And possibly that is one of the major simpaticos of la cienca ficción, when your back is against the wall and you are denied any place in a world of putas and pendejos who think they have some social status and ownership from which you are going to be evicted: yeah, there are pretty much only the realms of inner and outer space left to set up camp.

with so few jobs

for a man of his color

since the new edicts

Well, the only thing I can say about this great book, Reyes Cardenas: Chicano Poet 1970-2010, is gracias primo for writing it!