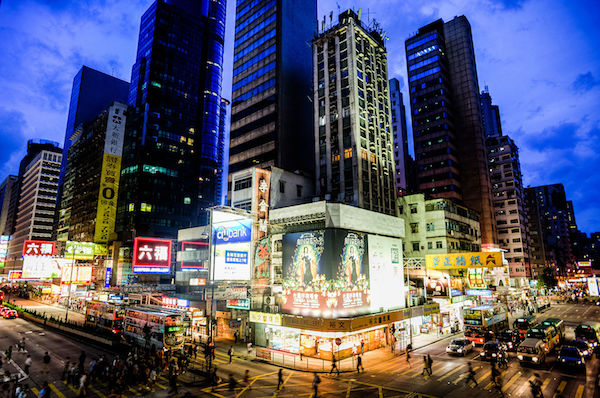 In conjunction with the Melon Conference 2, the University of Hong Kong recently held a seminar on Gender in Science Fiction and Fantasy Writing, described as: 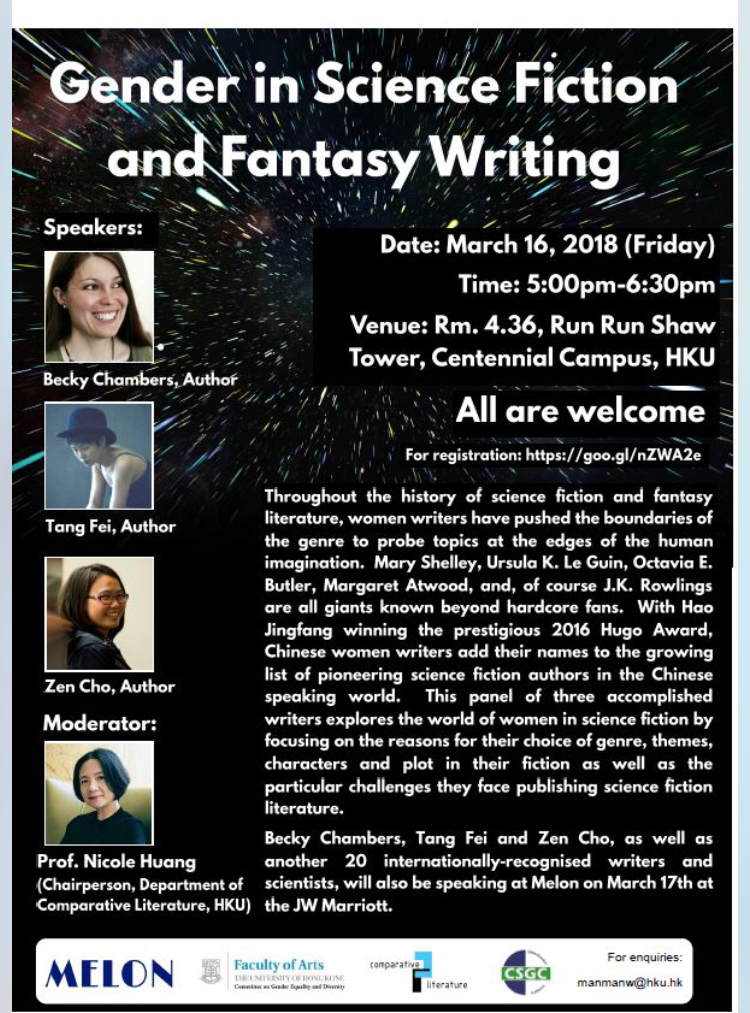 To find out more about the Hong Kong Science Fiction and Fantasy scene, Yunchtime reached out to Dr. Christine Yi Lai Luk, at the Institute for Humanities and Social Sciences of the Univeristy of Hong Kong, who attended the panel discussion.

YUNCHTIME: How did the seminar and panel discussion live up to the proposed topic?

LUK: There is plenty of room for improvement, I’d say. It is a panel of three women SF writers, but they did not explore “the world of women in SF” as advertised in the above description. It is more appropriate to call the seminar “women/gender and SF” because it is just three women talking about their SF work.

YUNCHTIME: How about the panelists, can you describe briefly some of their thoughts or comments?

LUK: I think Becky Chambers‘ views were the most relevant to the proposed topic. Chambers revealed how she was drawn into the world of SF from an early age onward. Raised in a space science-heavy family (her father is a rocket engineer and her mother an astrobiologist), she was introduced to SF and space fantasy movies as early as she could remember.

Her favorite SF novel of all time is “The Left Hand of Darkness” by Ursula LeGuin (a lot of nods from the audience as the name was dropped). She said writing SF gives her confidence as she is an introvert.

I think her experience reflects a certain gender norm in the SF realm: Unlike the blondy sorority type of girls, girls who are into SF are perceived as shy and nerdy, and incapable of drawing the attention from the opposite sex (except maybe from Wookie-dressed superfans).

Tang Fei does not write in English, only in Chinese. Her Chinese works are translated into English and they draw attention in the English-speaking world partly because her works are banned in China. Actually, Tang Fei is a pen name.

Because the conference was being held entirely in English and due to the language barrier, Tang Fei’s sharing was not effective as we could have hoped. She only managed to say a few sentences in English (with a very soft voice). Then, during the Q&A, she was relying on the organizer, Nicole Huang, to act as her interpreter.

The main thing I caught from Tang Fei is that in the future, human beings will exist in disembodied form and thus the only “gender” issue for SF writers to engage in will be purely on the psychological aspect.

Zen Cho talked about her upbringing in Malaysia and her identity as an English-speaking Hokkien among mainstream Malays. She did not identify herself as a SF writer, but as a fantasy writer. I don’t think she has said anything remotely relevant to gender.

YUNCHTIME: In the U.S. the “gender” topic these days typically encompasses a wider net of not only gender but sexuality, including male, female, cis, gender neutral, lgbt, androgyny, and so on. In this panel discussion the title mentions “gender” but the compostion of the panel, and the description seems to be female-centric. Was the panel actual more of a feminist gender panel?.

LUK:
It is very female-centric. There isn’t any discussion whatsoever on homosexuality or heteronormativity. They didn’t talk about how being female inspire their creative writings. On the other hand, Chambers discussed how SF was related to the US bipartisan politics.

YUNCHTIME: How are the related issues of transgender, body modification, transhumanism percieved in Hong Kong?

LUK: Body politics is getting more attention in the Hong Kong society these days. Taiwan’s announcement of the legalization of same-sex marriage is a wake-up call for Hong Kong. I’d say Hong Kong as a whole is rather conservative. A sizable set of the population (mostly the elderly) still condemn and even criminalize homosexual behaviors.

YUNCHTIME: How about your own views on gender in Science Fiction and Fantasy? Do you think that gender roles are changing and the ways they are depicted in genre also changing with the times?

LUK: I think changes are afoot. Women used to be depicted as nurturing, loving, pretty (see how the female crews from Star Trek: The Original Series were dressed in mini-skirts and go-go boots and filmed with soft lights?) while men are depicted as rational, heroic, and strong. But compared to this old gender norm, women are now portrayed differently.

In episode 1, season 4 of Black Mirror, the leading female character is smart, strong, pretty, and hell-bent on leading the crew (created involuntarily by DNA cloning) to escape from the fantasy space-ship dictated by the male protagonist. Film critics credited this episode as “how women navigate male entitlement in geek culture,” and “a searing and surprising indictment of toxic masculinity.”

Shifting the lens to China, the protagonist in Cixin Liu’s award-winning “Three-Body Problem” is a female astrophysicist, who is the first contact person with the leader of ETO. Not to mention the fact that most leading characters in Hayao Miyazaki’s animations are female. There are also several relevant articles linking Miyazaki’s fantasy films with feminism:

Hayao Miyazaki and the Art of Being a Woman

‘Women are realistic, men idealistic’: Studio Ghibli on why a director’s gender matters

YUNCHTIME: What about your own work? Have you explored these gender issues, for example in the history of science?

LUK: Not really. Previously I had explored this topic a bit in research for my master’s degree on the topic of under-representation of women in science and engineering but that’s more a sociological study without much historical analysis.

YUNCHTIME: You also worked on the use of animal subjects for scientific research in orbital space missions. And I saw that one of the speakers at the Melon Conference was Lisa Nip (of MIT) who studies the evolution of biological organisms for living in outer space. It’s interesting to me that more women are working in scientific and academic fields on projects that seem to be the very stuff of science fiction. Do these science fictional themes influence your writing?

LUK: Well, I am so not on a par with Nip. In fact, I have never written a SF novel. I wanted to but never gotten the time and determination to do it. I am more like a hobbyist, teetering on the margin of SF fandom when in comes to this kind of writing.

YUNCHTIME: After living in the U.S. for a number of years, then moving back to Hong Kong, did you have a culture shock? Does Hong Kong seem like an sfnal space?

LUK: Haha, it does feel strange to move back. After 6 and a half years living in AZ, I need to readjust to the urban living cruelty, the ubiquitous humidity, and the local politics on a day-to-day basis. People assume that I will be happy to move to my home town and be with my family. Truth is, I miss having a spacious, affordable residence in a sparsely populated town. In Hong Kong, this is a dream.

Whenever I am sitting on the upper deck of a double-decker bus, I feel like I am flying past all the vertical high-rise buildings and heading towards that tiny spot in mid-air. You are right, HK does seem like a science-fictional space, because it is so vertical and vision-blocking that you need some imagination to get some insights here.

Thanks very much to our colleague and fellow SF fan, Dr. Christine Luk for her reportage!

Dr. Christine Luk is currently a post-doc at the University of Hong Kong. Her PhD thesis in the History of Science was published as A History of Biophysics in Contemporary China from Springer-Verlag (2015)

See also our Interview with Allen Steele on the Melon Conference 2.