This year at Boskone, there were some interesting panels, great painting demos by Bob Eggleton and Omar Rayyan, and a nice gallery of paintings from Boskones past and present alongside works by the Artist GOH, Dean Morrissey. 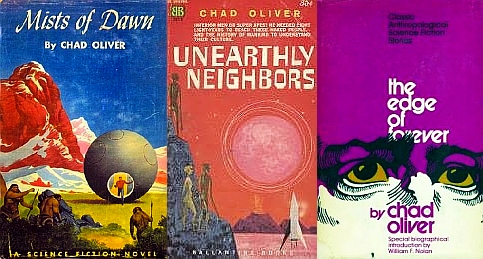 The first panel I attended was on the works of Chad Oliver, the great anthropologist / SF author from Texas. Amy Thomson, whose work on the encounters between humans and aliens (and between robot girl and humans) remarked that, in fact, she was not influenced by Oliver before writing the Color of Distance and Through Alien Eyes, and only came to appreciate the anthropological aspects of Oliver’s science fiction in retrospect. George Zebrowski told of his long working relationship with Chad Oliver. When he worked with Crown Books as editor for their Classics of Modern Science Fiction series in the mid-1980s, Zebrowski was asked what the first ten volumes should be, and he told them that the three of those ten should include Chad Oliver’s novels: Shores of Another Sea, Shadows of the Sun, and Unearthly Neighbors. Three out of ten? By the same author! Was Zebrowski out of his mind? But, in fact, Crown ended up supporting the suggestion and those novels did appear as the 3rd, 8th, and 9th volumes in the series.

Howard Waldrop was one of Oliver’s oldest and closest friends. When asked about how Oliver became interested in science fiction, Waldrop said that during a childhood bout with rhuematic fever, Oliver was given a stack of pulp magazines to read - his favorites at the time included air war stories and westerns. But by pure accident someone had bought him a copy of Amazing Stories, and having read it, Oliver shot out of his sick bed and rode his bicycle for several miles to the nearest news stand, where he proceeded to buy every science fiction mag he could get his hands on. From that moment Oliver was hooked. Later on, Oliver and Waldrop became fishing buddies and they subsequently spent more than 20 summer fishing trips together in Colorado and other Western spots.

Waldrop went on to describe the highlights of Oliver’s writing career, including his novels and best short stories, such as Ghost Ship, (which appeared in Mid-Sep 1983 Analog). After the panel I scoured the Boskone dealers room where I found three of Chad Oliver’s novels, one anthology, and the original issue of Analog with “Ghost Ship!” Thanks to Howard and MITSFS!

Mind If We Pick Your Brraains? The Zombie Panel

The liveliest panel on Friday night, naturally, was about the brain-eating undead. The moderator, John Langan, (author, critic, and frequent contributor to the Zombie Fiction Database) had his hands full keeping some sort of order among the rabid panelists and raving audience. Seanan McGuire, filker and zombologist, rattled out a veritable dictionary of virology and zombie facts, and said with an almost manic glee that an Ebola outbreak occurred on her birthday. “Anyone who buys me a beer will hear an entire weekend of details,” she offered…though I must say I didn’t subsequently see her in the bar with any takers. Bob Eggleton provided so many juicy details from Zombie films - including the film featured on his t-shirt, Planet Terror - that I seriously began to wonder how he has any time to paint at all!

Sonya Taafe shared her virtuoso knowledge of the dissolution of the vampire mythos, from a once glorious state of pure blood-sucking evil, to the overly eroticized dandies that we find today. For example, she pointed out that the original Nosferatu came sailing in on a sea of plague-ridden rats, and was a truly menacing, undead, neckbiting fiend. Michael Swanwick suggested that “it is precisely because the vampires, the Draculas and all the Transylvanian elite became so elegant and refined, that zombies have come shambling into that space which has a need for mindless flesh-eating monsters”. The audience responded with gusto to these remarks, peppering the panel with graphic imagery from their favorite zombie films, comics, and novels, to the point that John Langan fought back desperately to regain some sense of humanity and morality. “In Shaun of the Dead,” he reminded us,”when the protagonist realizes that he has to kill his own mother in order to prevent her from turning into a zombie, isn’t that a kind of gut-wrenching scene? To kill your own mother - put a bullet right between her eyes - we really don’t want to go there!” To which Sonya Taafe replied, “you won’t get more profound boundary-fucking than something that makes you shoot your own mother.”

The discussion then turned to what the boundaries were between the meaning of zombies and human survival vis a vis pandemic disease outbreaks, which then proceeded to a sort of taxonomic analysis of the types of zombies - the slow shambling flesh eating type, the shambling brain eating type, the slow but not completely unhuman zombie, and then the “infected” zombies who are not undead, but soon will be, who are very fast on their feet indeed! The idea of an unstoppable pandemic, which nearly all the panelists agreed is almost sure to happen, meant that the zombie has become the perfect metaphor for today’s alienated and bio-paranoid zeitgeist. In short, zombies are just a wake-up call to let you know that any time now, probably tonight, some kind of plague or brain-eating monster is going to be knocking on your door. The good news is that if you live in Viriconium, then you won’t be surprised!

The Appeal of the Lawless Elite

Fortunately when the zombies come a’knockin we will have bands of lawless elites raising banners of insurrection and sweeping away our current rotten, self-destructive society to replace it with something better. Or not.

Surely the liveliest panel on Saturday, the discussants of this session came out in a blaze of rhetorical gunfire. Alexander Jablokov defined the need for the lawless elite in this way: “when you are sitting through some insufferable harangue at your local town committee meeting, and the stark flourescent lighting on school cafeteria tables reveals what a petty and impossible situation it is to actually solve anything in politics, don’t you just want to pick up a sword and cut all those idiots’ heads off?” Hearty agreement all around set in motion the discussion that followed. Yes, there will always be a grievance and there will always be some segment of the population who wants to take the situation into their own hands. But is literature about the lawless elite just a form of escapism to let off steam? Or does it have actual ramifications in how we deal with our political situation? Then the Turner Diaries was brought up as an example of how a work of fiction about a lawless elite can be used as real propaganda to stir up action. Karl Schroeder insisted that evil arises from a sense of being victimized. There was some debate among the panelists and audience on that topic, but Schroeder refused to budge on his opinion, though he eventually hedged it to mean that a certain kind of evil is caused by a group feeling victimized, but not ALL evil per se.

Looking more closely at the “elite” part of lawless elites, historical examples of revolutions that occurred in the name of the masses but which were manipulated by small groups into totalitarian regimes were examined. “Weren’t the American revolutionary leaders a lawless elite?” someone asked. Indeed! Meacham concurred, they were a small group of rich, white, male, slave-owners. “But didn’t they specifically reject Aristocracy and kingship, in favor of democracy? They created a sunset provision for themselves in order to relinquish control of the state to an elected body of government.” Paul Park suggested that perhaps personal power at the local level - being a big fish in a small pond - is actually more satisfying than being a King over a messy state. So why shouldn’t Washington refuse the crown and return to Mt. Vernon, where he had a visceral sense of total power? Hmm, food for thought!

Another audience member asked for comments on lawless elites that exist WITHIN the state that they are supposedly defending - the rogue cops, the Dirty Harries, the entire Bush-Cheney junta… This led to speculations on fictional scenarios in which rogue elements within the government were engaged in wiping out other rogue elements that had crossed the invisible line in their own actions. Although these lawless elites believed themselves to be defending the state, at some point they become nothing more than thugs and terrorists. Believable? Too close to reality? A premise that might sell!

And then what of the lawless elite once their job is done? Do they sunset themselves out of power, once they have successfully overthrown the utterly corrupt and despicable tyrants? After all, doesn’t the group that finally wrests control, or their successors, eventually ossify into an oppressive regime? Absolute power corrupts absolutely, as the saying goes. And why should the author expend so much effort to build sympathy for a lawless elite, if they will only slide down the slippery slope into tyranny at the end of the story arc? Patrick Nielsen Hayden pointed out that even in the writings of Tolkein, the triumph of the righteous was only a brief respite in an otherwise unrelenting aeon of horror and oppression. So, as it turns out, according to the findings of this Boskone panel, the triumphant lawless elite will nevertheless have their brains eaten by each other or the nearest horde of zombies in the end. Though you probably want to edit out those last few pages.

Next con I will take some notes or something, since this is all I can remember off the top of my head! As Heinrich Heine once said, “thank goodness, at least I am sitting here drinking good coffee with my head still planted firmly on my shoulders!”