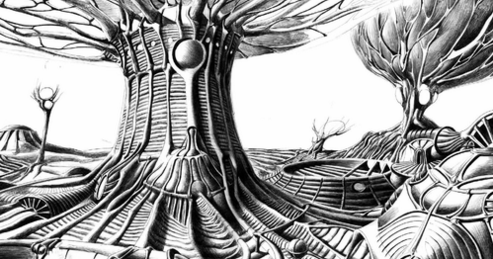 Reading “The Second Marxian Invasion“ about the Strugatski Brothers by Stephen W. Potts. Apparently this was Potts’ thesis at UC Berkeley and it is fascinating reading indeed. Tracing the utopian, socialist, and totalitarian themes in Russian fantastika literature from it’s earliest origins in the late 18th Century, the author describes how various Russian writers reacted to events such as the failed revolution in 1905, and the victory of the communists in 1917. For every utopian vision of the early Russian SF, there were dystopias, horrors, and complexities. Zamaytin’s _We_, published in 1921, is considered the classic tale of dystopia under totalitarianism, but according to Potts, it was not a counter-revolutionary work so much as a complaint that the Bolshevik utopia had not gone far enough towards the total liberation and union of personal and political interests.

The modernist craze of the Leninist years eventually was constricted by Stalin’s paranoia, resulting in a number of science fiction authors vanishing to the gulags. Only writers like Belyaev, who could “reduce their technological miracles to the level of fairy tales, and inject their work with starkly ideological plots” were able to survive. When the “thaw” finally took place in 1956, the subsequent launch of Sputnik propelled Soviet SF into a new hard science phase that eventually was characterized as “cold stream” SF. This cold stream was one in which SF was narrowly conceived of as optimistic, science-oriented, and upbeat; similar to our sense-of-wonder space opera days, but one emerging from the constraints of Stalinist censorship and therefore self-consciously regulating itself and focused on a sort of vanguard of hard science futurism. The Strugatsky brothers, whose themes were more diffuse, more challenging, and informed by anthropology, psychology and the “soft” sciences, as well as the nascent New Wave, were seen as “warm stream” writers.

In the 60s there was an ideological battle between the cold stream and warm stream, which was conceptually decided when the warm stream became more popular and when important critics advocated for science fiction with a purpose that transcended mere prediction and imagining of future technological advances. Here Potts quotes some criticism from 1968 about SF, but which raises some interesting thoughts about the purpose of writing in general:

…we take as a criterion in assessing the value of a work everything that promotes the development of the human personality, extends its horizon, inspires it with lofty ideals, ennobles it morally and intellectually, improves its aesthetic preception [sic] of the environment, helps to gain an insight into the good and evil of this world, and to respond to them more keenly — in short, it is everything that promotes the truly human in man.

This strikes me as just a brilliant way to write anything!

After reading this I discovered a complete Russian translation of Potts’ book, which was the only place I could confirm the original Russian for cold stream холодного потока and warm stream теплым потоком.

How uplifting a thought! To write fiction to inspire others with lofty ideals… And why not also cook foods to promote health and happiness? This positive energy is truly needed!

Especially in the today’s world, where the debate rages on the “value” or “artistic motives” behind the depiction of torture in the movie Zero Dark Thirty. For my part, I agree with Slavoj Zizek, which is to say that we should know in our guts that torture is wrong and be repelled by it…that the “nuetral” depiction of it in arts is merely a method of desensitizing humanity and making it more subject to such atrocities, particularly when the story is about the way in which torturers compartmentalize their actions and appear to be members of “normal” society. There is nothing normal or acceptable about a torturer, a sociopath, or a serial killer! Such people need to be stopped before they do more harm! But we live in an age when torturers are protected and their accusers jailed. Which is a sad thing.

Further, we live in an age when people make dessert cakes in the shape of severed human body parts, with pieces of bone sticking out, tied up with edible ropes and shackles, and lying in pools of red frosting “blood.” This sort of hideous psychotic cake is considered “amusing” and an “art form” by people at BoingBoing. I am so sickened by this cynical attitude that I have suddenly realized how poisonous BoingBoing itself is. The über-geeks, who portray themselves as the “smartest guys in the room… even smarter than those other guys!” are, in point of fact, unthinking, uncritical, and undeveloped spiritually. They are riding on a collossal wave of popularity, but they are shallow, cynical, and — if you look at the sort of gruesome shit that turns them on — somewhat depraved, in my opinion. And guess what, if they feel entitled to shit all over anyone who doesn’t agree with their opinion about “art,” (which they certainly do with great gusto and self-satisfied crowing in their blog posts and comments,) then I am certainly entitled to have my opinion about their behavior!

Therefore, I have resolved to totally shut off my contact with that “trendy” BoingBoing bullshit. Previously I thought the contributors kept up with current affairs in a healthy fashion, for example, by widely disseminating the tragic death of Aaron Swartz. But now my opinion has drastically changed. By playing favorites and shooting from the hip without any moral compass, the sum effect of BoingBoing is negative, and just serves to perpetuate the fascist bullshit that it pretends to oppose. Think of the mixed message: Boingboing exhibits moral outrage about the prosecution of Aaron Swartz, and then exactly the same level of outrage at someone who comments that “edible body parts” photos are disgusting. Are these “crimes” comparable? Ultimately it serves exactly the same purpose as Zero Dark Thirty, which is to inoculate a large audience with the impression that extreme violence is “okay” and “normal” under certain circumstances.

You can torture another living being because you are fighting for the “good side;” and you can gobble down severed human body parts because they are just “amusing” desserts; you can watch the extreme graphic gore in Django Unchained that makes you vomit and still love the movie because it just so “great.” What the hell is wrong with the brains of people being subjected to this continuous onslaught of graphic slaughter? To be perfectly clear: they have been brainwashed into thinking destruction of living beings is cool and fun to watch. Evil? Psychotic? Yes, in point of fact. And just saying… if that stuff turns you on, then you are disturbed. I’m not going to argue with anyone about this.

On the contrary, I am going to think long and hard about the passage on “warm stream” SF quoted above… That is the message! Not brutality, but raising of consciousness! Thank goodness for the dialectic that resulted in Russian critics actually reflecting on these matters. If only aggressive morons with blood running down their demented chins will not kill the rest of us, we can still do good work for humanity and for the great spirit that permeates the cosmos. I know exactly whose side I’m on, brother! And it is not the giggling, posturing jack-asses who are sinking their teeth into chunks of cakes in the shape of human body parts.