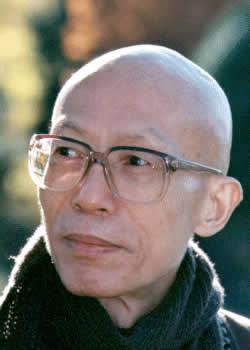 The parting message written by Master Sheng Yen to all of us:

Shedding tears and laughter over emptiness…

But in the beginning there was no I,

So birth and death can both be tossed aside.**

All those years ago, as I wandered the streets of New York in search of adulthood, in search of myself, in search of a circle of fast-talking whiskey-drinking writers and artists that would rage with me against the dark sky in mutual bewilderment… As a teenaged blunderkind I roamed the length of Manhattan in search of truth, in search of food for the soul, in search of beauty and poetry and unfettered freedom, in search of anything that could set my feet on a meaningful journey… and then, by pure chance, I stumbled into the realm of Ch’an Master Sheng Yen.

Somehow I knew he was a true Zen master from the first moment that I heard him speak. And from the simple and yet often mischievous sparkle in his eyes, I knew that Shi-fu (as we called him) really had it! He knew exactly what those realms of satori and higher consciousness were, and he wanted to get us out of our self-deceiving funk to experience them for ourselves. If I had been a little older or wiser at the time I might have learned more. But then again, if I was a little older I might not have been so deeply affected by the teachings of Master Sheng Yen when he arrived in New York City.

At first, there was a short series of teachings at Columbia Teacher’s College. Twenty people showed up the first night, but by the fourth session there were barely half a dozen of us left, sitting rigidly on the cold floor. One night, Sheng Yen slowly drew a chalk diagram of the seven states of Ch’an mind on the blackboard. If you studied with Sheng Yen Shi-fu, you no doubt will have heard him lecture on this topic. If not, you can probably get the general idea of what happens to your mental state as you progress through stages of calming down, concentration, mindfulness, and Ch’an. I still have the copy of that diagram that I scrawled onto the back of a name card, and have been striving to experience those states ever since… 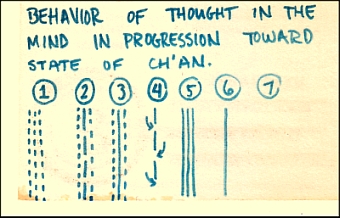 Some months later, we took over an old car repair shop, covered in grime and grease, and cleaned it up to serve as the first Ch’an Meditation Centre in Flushing Queens. (Today the Ch’an Centre is thriving in a much bigger location. ) I’ll never forget the time that Guoren Shi (Sheng Yen’s first American disciple) and I went to a carpet shop and Sheng Yen insisted on buying some rolled up remnants from a rack without even measuring them. We carried them up into the Meditation Center and tossed them into the two front rooms.

Sheng Yen, watching us sardonically from the hallway shook his head and said, “No, you’ve got it backwards. Switch the carpets around.” Guoren Shi and I shrugged and swapped the rolled up carpets from one room to the other. Then we lined up one carpet along the wall of Shi-fu’s office room and snipped the strings with a pair of scissors. We gave the carpet a kick and it unrolled straight across the empty floor where the last bit flopped down exactly along the opposite wall!

A sort of bolt of blue strangeness shot up our backs. How the heck did Sheng Yen know the remnant would fit perfectly - in that room, but not the other? After all, we hadn’t untied them or measured them in the carpet shop… With a strange foreboding of the inevitable we repeated the unrolling process with the other carpet and saw that it fit just as well as the first one. But when we turned around in amazement, Sheng Yen frowned at us. “Are you just going to stand there like bums,” he complained, “go wash the dishes!” Nonetheless, I’m convinced that there was a subtle smile on his face as we hurried down the hall.

Another time, when we first began to clean the old repair shop, Shifu took me to the picture window downstairs and asked me to open up the old metal security grate that was spanning the window. I did that and we saw that the window was completely covered with grime and grease. It was a depressing sight. “I want you to clean that window up,” Shifu said. Then he took a single edge razor blade out of his sleeve where he had been hiding it and gave it to me. I looked at the tiny blade and then at the huge window and must have looked pretty forlorn, but I set to the task of cleaning it up.

After many hours of scraping and wiping with rags, I finally had the full pane of glass cleaned up and spotless both inside and out. I was standing and admiring my work, when Shifu came in and asked me to get to work on the basement. Now what happened was, when I next came to the building about ten days later, somebody had painted the entire metal grate that covered the window with bright gold paint. Shifu asked me to take a look at it with him, then he asked me to open up the grate again. When I opened it, I discovered that the painter did not take any precaution to cover the glass window, which was now splattered with blobs of gold paint from top to bottom. My beautiful clean window!

I turned around with a look of shock on my face. Shifu was only smiling at me for a moment, then he slowly took the razor blade back out of his sleeve, handed it to me, and walked away in silence. I was filled with surprise, frustration, and finally humor and burst out laughing. Then I set to work to scrape the whole window again!

My stories of Sheng Yen are all like that, and there are many of them. I can’t believe that I only spent a few hours a week with him in 1979 and 1980. It seems as if he has always been with me, smacking me on the head when my focus began to fade, pointing at the Moon while I day-dreamed my life away, and admonishing me to work hard - work hard! - on my Ch’an practice. His parting words to me have been clicking in my mind for thirty years:

I thought of them as a special mantra, in addition to the kung-an he gave me to work on, and kept at them for decades. Long after I knew that it was the same exact admonition that Sheng Yen told everybody, I still somehow remembered it as if it was hand-crafted to my own “vast kharmic obstructions,” as he cheerfully used to call them. Every single one of us students got the same treatment, and a bunch of lazy good-for-nothings most of us were, who Sheng Yen constantly goaded towards the light.

So long, Master Sheng Yen, we miss you already!

A dialog between Master Sheng Yen and the Dalai Lama