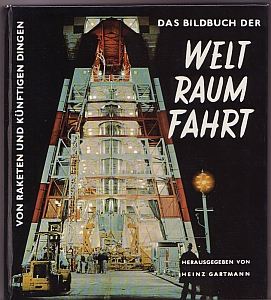 On a trip to Vienna last week, I was happy as a clam to find a copy of “Das Bildbuch der Welt Raum Fahrt,” [Picture Book of Space Travel] which documents the latest advances in Space Travel up to the year it was published, 1960. Directly across the street from the Sigmund Freud Museum was a second hand store where I scored this odd picture book for only 0.70 Euros.

That night at the hotel they were airing television programs about the 50th anniversary of Sputnik’s launch, which made the find even juicier. In addition to more than 40 pages of detailed histories of the early space race, the second half of the book features some really high quality black and white photos. For example, a curious picture shows Werhner Von Braun, age 18, carrying a rocket model on his shoulder out to the test launching pad… 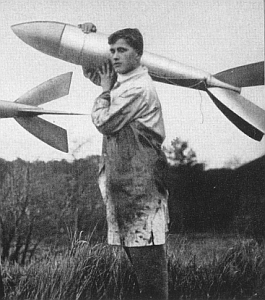 It looks as if Werhnie’s shirt is a little mussed up from earlier tests….So that’s how it all started!Another intriguing shot depicts an early prototype spacesuit from 1952. Looks like they sort of ran out of time on the boots and grabbed some waders off a local fisherman, doesn’t it? And those hoses? I’m not sure I’d want to bet my life on something pilfered from the office vacuum cleaner… Then again, the US space program was still a decade away from getting someone into orbit.

Meanwhile, the Soviet space program was hard at work. If you compare the images of the Soviet cosmonaut practicing for space with that of the American astronauts practicing, you can guess why the Soviets made it into orbit first!