Only by chance did I notice that Lloyd Dangle, cartoonist and creator of Troubletown, is currently tramping across America on a 20th Anniversary Book Tour, celebrating two decades of ceaseless trouble! How can it be that most people know Dangle only because of his Airborne packages, and not for his amazing comics? 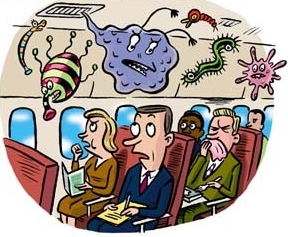 Dangle has a biting dry wit, and what you would think is a cynical view of the United States…and yet, if go back through his work, you can feel the continuous strain of a fuming anger, which boils up into occasional insensate rage at all the things wrong with this country. Indeed, like many of us, Dangle is a regular patriot, a true-believer in what America should have been, and a raging don’t-tread-on-me advocate for some kind of justice that will bring down the scumbags who have esconced themselves in seats of power. Otherwise, why would he bother to ramp himself up into such delirious furies in the pages of Troubletown? How on earth could he sustain it for twenty years? 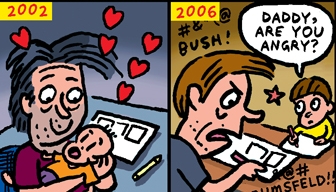 All these people crying for the loss of gonzo journalism ought to browse back through the archive of Troubletown. They should take a look at some of the classic strips, which manage to go directly for the jugular of the worst criminal swine in recent history - laying out the ugliness of their actions in broad daylight - and at the same time making us laugh our heads off with joy at the mere thought that the criminal perversity of American politics can somehow be shaken down and fixed.

Not that Dangle comes off as any kind of saint! Aficionados of his short-lived Dangle Comics, published by Drawn and Quarterly, will remember some fantastic frenzies of debauchery, self-loathing, and wanton mayhem. Not to mention one of the funniest strips about bike messengers in the history of comics! The sneering, uber-critical Dangle tone is laid on thick in these minor masterpieces, a prime example of which would be the “Reviewer’s Night Out” that appeared in Dangle #2. I’ve scanned the closing segment of this two-page feature, which you can see by clicking on the following panel. 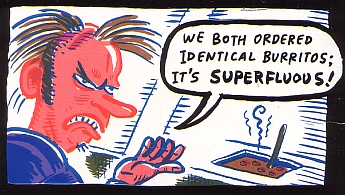 How on earth did the Dangle brain develop? A revealing insight is found in Scott Butki’s Interview with Dangle that appeared in BlogCritics Magazine (July 2007):

“Odd as it sounds, I had a crazy image of myself being a cartoonist when I was a kid. I imagined I would have this really cool lifestyle where I sit around a groovy Manhattan apartment, smoking a pipe, being witty and urbane, and somehow wads of money would just flow in. After a lot of missteps and twists and turns I ended up doing almost exactly what I had pictured, except for the pipe and the Manhattan digs––and the money.

Mostly, I have always been very good at ridiculing people and drawing portraits that exaggerate their flaws and sensitivities. These things in the normal world will get you fired or beaten up, but for a cartoonist they come in very handy.”

So here’s to you, Dangle! Twenty more years!