Philip Jose Farmer, one of the great SF minds of our times, passed away in his Peoria, Illinois home. The tributes and obits are flowing in from all corners of society. SF Site has posted a great 1975 interview conducted in Minneaopolis by Dave Truesdale, (editor of Tangent fanzine), which primarily deals with the identity of Kilgore Trout. 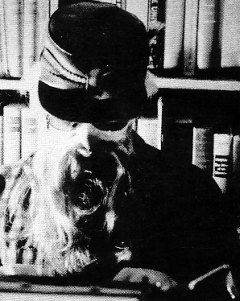 Not the fictional Kilgore Trout who appeared in Vonnegut’s Breakfast of Champions, but the author Kilgore Trout, who wrote Venus on the Half-Shell, which was published as a serial in F&SF in Dec 1974 - Jan 1975, then picked up as a mass market paperback by Dell. At the time, there was intense speculation among SF fans about the true identity of Kilgore Trout, shown above at his typewriter on the back cover of the Dell paperback. Who was that weird beard? And how the heck did his whiskers manage to grow up, around, and on top of his nose?

This mystery fascinated me, both for the absurd photo and the absurdity of the fictional character coming to life to write his own hilarious in-character novel. It was not simply a gag, either. When the word finally leaked out that, in fact, it was Philip Jose Farmer who wrote the book — not Vonnegut — it made perfect sense, because Farmer was noted for his amazing ability to research the styles and sensibilities of fictional characters created by other writers and to breathe new life into them in his own works. When I found out that Venus on the Half Shell was by the same author as Jungle Rot Kid on the Nod, my respect for Farmer shot up into orbit. And it never came down, either!

How ironic that Jungle Rot Kid (a tale of Tarzan as if written by William S. Burroughs instead of Edgar Rice Burroughs) first appeared in the popular music and culture zine, Broadside (vol4 no2, 1968) with a semi-sleazy cover, reminiscent of the skin mags that supposedly were the publishers of Kilgore Trout’s own novels. 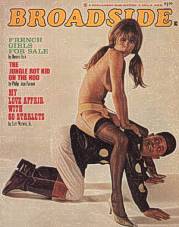 The amazing thing to me about Farmer is that he can deftly weave his way into the consciousness of a character, almost effortlessly, and reveal the thoughts and emotions of that character exactly the way you would have expected it to be. This was by no means an accident! Farmer went to enormous lengths to research his subjects, going so far as to actually meet the real Lord Graystoke in his pursuit of Tarzan’s psyche. The result was his biography of the fictional character, Tarzan, Tarzan Alive. Farmer went on to use the same technique in Doc Savage, his Apocalyptic Life, for which he re-read 150 consecutive Doc Savage pulps! The visualization of both real and fictional people, who have some notoriety in culture or history, was one of the constant themes of Farmer’s writing style, carrying on through his entire Riverworld series.

Aloha, Philip, your humor, razor-sharp wit, chameleon-like adaption to styles and topics, and always riveting prose will be treasured as American classics!