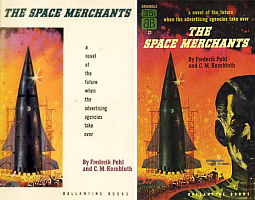 One of the great satirical classics of Science Fiction is surely “Space Merchants,” by Fred Pohl and Cyril M. Kornbluth, which skewers the American traditions of corporate greed, deceptive advertising, and the treatment of consumers as stooges, suckers, retarded fools, and miserable cattle. The story accomplishes this in a slick, almost effortless Science Fiction setting, which is fast-paced and chock full of sadistic irony. It’s important to remember the context of American society at the time of publication — 1953 — when the Cold War was in full swing, and the complete subservience to the Capitalist credo was not only the mood of the times, but was enforced by psychological warfare, not the least of which were accusations, blacklists, and finally the foaming-mouthed lunacy of McCarthyism.

Kurt Vonnegut’s first novel, Player Piano, had appeared only the previous year, and began to chew holes into the mythology of the American Corporation as the great, caring, patriarch of society. The same year — 1952 — Arthur Miller took on McCarthyism in The Crucible, his metaphorical treatment of the Salem Witch Trials. And the following year — 1954 — Edward Roscoe Murrow made his famous case against McCarthy on See It Now.

If any of this interests you, perhaps you will be as delighted as I was to discover the CBS Radio Play version of the Space Merchants, which was broadcast in February 1957. The producers managed to compress the novel into one hour and still retain the gist of the storyline. Additionally, the play has the charming feel of the period, the sound effects, and whiskey-filtered speedy accent of the Madison Avenue advertiser. Anyone amused (or bemused) by the antics of the t.v. series Mad Men, might enjoy hearing a period piece that captures some of the sound and tone of the real thing. Not to mention some classic SF humor.

“I’ve been Shanghaied, robbed of my name, forced to work as a slave in the tropics…” fumes the protagonist, but with a snide, condescending air. You can almost choke on the greed and superiority complexes of the major characters, very similar to the venal jackals of our own times, who continue to pay themselves millions even as they flee for the exits! While the empty Mammon of financial instruments that they invented comes bursting down upon us all in a shower of rivets and duct tape, they merely dust themselves off, disdainfully flicking a few lawsuits our way, since they have been denied their rightful stream of income… How we wish that all of these swine could be thrown into the growing vats of Chicken Little, having stripped them of their ill-gotten wealth and supplied them with shovels. Well, who knows? It may be the right time for this meme to finally make it onto to big screen! In the meantime, let’s enjoy this great adaption from the 1950s:

Note: While working on this draft, Fred Pohl posted an anecdote about how Space Merchants nearly became a Broadway play.