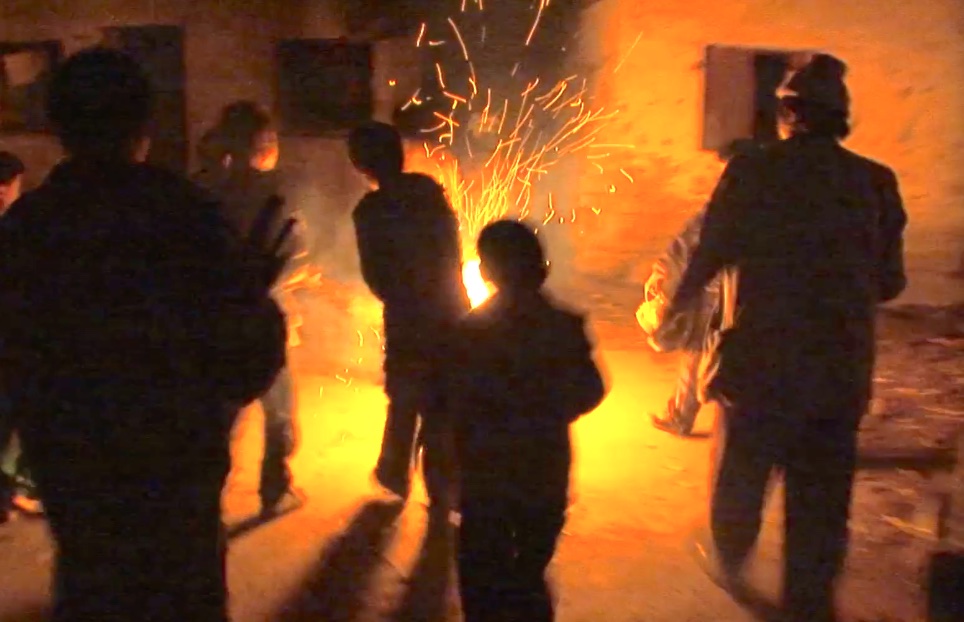 The reason I wanted to check out Ovid.tv was to watch the documentary about a small town in Southwest China, called Ghost Town. There was a showing of it several years ago that I missed and I was surprised to find a streaming video service that specialized in such odd material.

Ghost Town is a cinema verite film that follows the impoverished villagers in the small, officially abandoned town of Zhiziluo. This long documentary is terrific for a Yunnan-ophile like myself. But you might find some other feature in the Ovid.tv catalog that you want to check out first.

Imagine my surprise when they send me an email with the subject line:

Now Streaming: Guy Debord’s Society of the Spectacle and Other Political Films.

How did they know that I’m a fanatic for situationism? Could there be hordes of other far left anarchists with a penchant for French voice-overs out there? Grinning behind lit bowling balls at their nearest Starbucks? Could the world finally be evolving into some sort of post-cable t.v. realm of possibilities. Enfin!

If you’ve never seen the original version of Society of the Spectacle, with it’s montage of imagery from classic films and contemporary 1970s culture, you really should check it out! Wikipedia has a good overview of the 1973 film, with it’s radical critiques of everything and anything.

The more I watched it and the more I listened to Debord’s narration, the closer I felt to those times when the debate about culture and what to do with our lives was rich with provocations that had meanings to unravel. Where did public discourse go? How did we lose ourselves to idiot boxes ranting at us with preposterous delusions? Nonetheless, if you have any taste for the problematic interpretation of our spectacle, our consumerist nightmare as it emerged in all it’s glory in the jet age of carefree oblivion, you will like hearing it from the horse’s mouth. Hearing it in the original voice of Debord.

As for the film Ghost Town, the scenery is the thing that kept me riveted to the entire 2.5 hours of footage. The amazing mountains that line the Nu Jiang, also known as the Salween River, are everpresent. Brooding, cold, with scarce resources to scratch out a living, the mountains remain forever at the borderlands.

As the film tracks the impoverished residents who stayed on after the government declared their town unsafe for habitation (due to earthquakes and landslides), you get an unfiltered view of what life is like there. The forgotten and underprivileged were left starving on the fringe of the huge industrial and engineering juggernaut that has powered China to the forefront of the world’s economy.

Scenes of children trapping tiny birds then plucking them and trying to roast them on a small fire made of twigs by the roadside are reminiscent of other great films about deprivation, such as Pather Pajali, or Wild Child. The commonality of all human suffering is the key, as is the search for meaning and redemption for those who can never escape from their dire circumstances.

Much of the film, Ghost Town, is taken up by the story of the Christian Missionaries who came to the region of the Salween River in the early decades of the 20th Century. Some of them stayed on preaching to local villagers right up until the consolidation of the Chinese frontier by the People’s Liberation Army. In those remote borderlands the integration with new China didn’t take place until the 1950s, as recounted in an excellent book by Robert Moseley.

There is a binding of time that takes place in the film Ghost Town, which pulls together the strands of natavist traditions and how they were absorbed or lost to the slow encroachment of the outside world; and there is a sense of timelessness, captured in a rugged landscape where people are still sliding across the raging torrent of the river on long rope slides as they have done for centuries.

To escape the doldrums of that abandoned town and to live in another official village across the river is even beyond the hopes and dreams of most people in Ghost Town. Does modern life have any meaning for the people left hanging on the precipice of a forgotten past?

There is neither moralizing nor voice-over trying to contextualize or explain anything in this film. Ghost Town is a true documentary in that sense. If you have a stomach for understanding what it’s like to get up at dawn and scramble to make a fire, the acrid smoke in your eyes as you try to stir a found cup of old baking flour into a greasy wok, then you will get this movie. If you can feel the pangs of hunger in your need to eat that half-cooked griddle cake – the only edible substance in a bare concrete shack with no windows – then you will relate to this film.

Having visited those valleys, having taken the long bus ride over the thousand hairpin turns of the Gaoligong range, and slept in wafer thin rest houses that could blow over in the cold wind, I can attest the truth of this scene. If you’ve ever ridden around a scarp of rocky pavement and looked down from a cliff directly into the frothing brown currents of the Salween River, you’ll know exactly what is going on. It is a forlorn and yet exciting place. It is the end of nowhere. A ghost town. Watch this movie if you want to know more.

Meanwhile, if you are feeling bored with the same flood of half-remembered feature films and over-hyped series from Netflix, Hulu, and Amazon Prime, I would definitely recommend giving Ovid.tv a try. They have assembled a thoughtful backlist of films including the Chinese contemporaries in the dgenerate films series, for one thing. And then they are scooping up streaming rights for scarcely seen gems like Society of the Spectacle, and the ensemble film Six in Paris (Paris vu Par) (1965).

Maybe, like me, you want to absorb media strategically. I can not spare the endless hours to binge watch content that people are talking about. It’s the same thing thing as worrying about catching up with coffee table best sellers from influencers. Wasn’t any different with Merv Griffin, Oprah, or any other spokesperson, if you ask me. Why do you have to care what society reads, if society ends up like this?

I’d rather watch the streets of 1965 Paris rolling by. I’d rather mesmerize myself with the possibility that we are still able to carve out and then live in realities of our own device. Let us escape false narratives constructed for us by corporations and their marketing divisions, eh?

The hammering of construction crews outside the window of this fleabag apartment can wait. I’ve got a train to catch and a slow journey to the last chateau in Argol.