Went to see Melies Trip to the Moon, and Kubrick’s 2001 at the Harvard-Smithsonian Center for Astrophysics Sci Fi Movie Night, and was treated to the world premiere of a song about our Solar planets, all 11 of them! The song we heard was an amusingly catchy tune, and though I can’t link you to a recording of it, or confirm the singer’s name (Lisa Lyons?), at least you heard about the song on Yunchtime first! 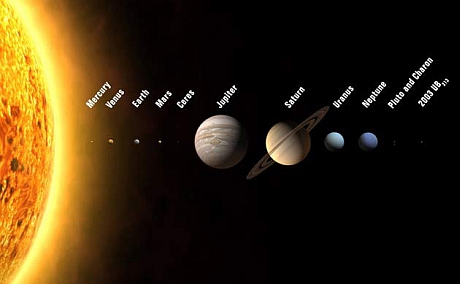 Yes, it seems that after a struggle among themselves almost as ridiculous as the opening scene of Trip to the Moon, the astronomers of the world have accepted the fact that dwarf planets are still planets. This means that not only do we regain our recently demoted Pluto, but we bring Ceres and Eris into the tribe. Following this remarkable turn-around in nomenclature, 11-year old Maryn Smith of Great Falls, Montana, won the schoolkids’ contest to invent a nifty mnemonic to help us remember the names of the planets, and their sequence in distance from the sun. Okay, sure, Pluto occasionally loops closer to the sun than Neptune, but after a couple of drinks ‘Nine Palace Elephants’ and ‘Palace Nine Elephants’ could hardly make a difference, right?