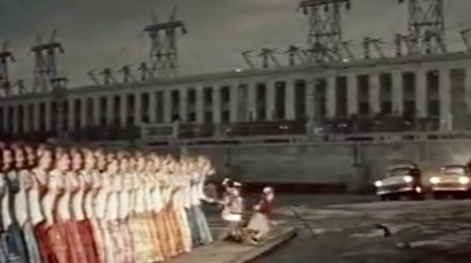 On BoingBoing there is a link to this “hypnotic folk dance,” which only one commentator identified correctly as Nadia Nadezhdin’s ensemble Birch founded in 1948.  (Thanks, Terry di Paolo!)  However, it is worth pointing out that the name of this particular piece, Прялица, means “spinning jenny,”  as in spinning of thread for weaving cloth.  This should be obvious from the motions of the performers as they sit and twist the braids of the thread, and is reinforced by the threads strung over the stage, and the camera angles taken through the skein of strings.   If you watch closely, you will also note that the patterns of the rotating group (when viewed from above) actually resembles different aspects of the spinning wheel, a technology that was much closer to the ordinary Soviet citizen of the 50s (when this dance was most likely performed).

Other internal evidence to date this piece can be seen in the fascinating crowd scenes at the end of the performance.   The giant klieg lights have fine molded vents and precision external gears.  It’s rather difficult to guess at a date of manufacture, but they clearly look like post WWII, pre 1970s objects.  But the image of these technical workers at the controls of great lights is a wonderful tribute to the socialist realism of the original futurists, a pure homage to Rodchenko, if you ask me! 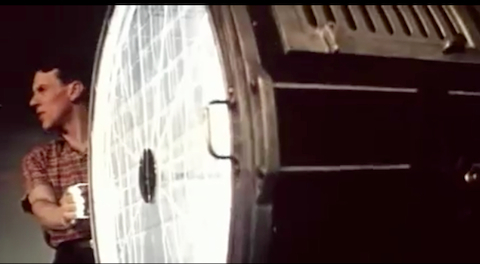 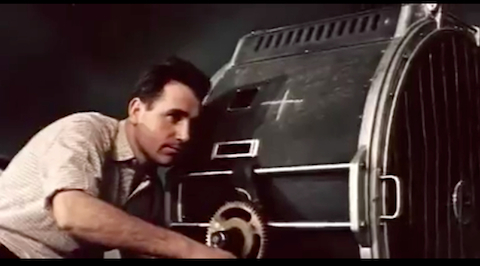 More revealing are the automobiles parked next to the audience.   The rounded front end of the bus looks very much like a late 1950s model, of the sort shown on the fascinating website OldRussianCars.  The sedans, likewise look like the spitting image of the 1957 Moskovitch 402. 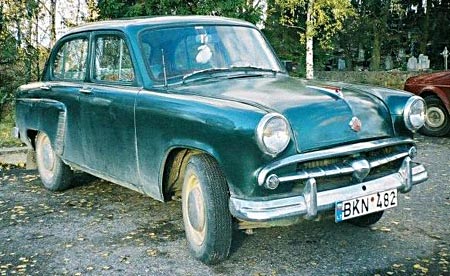 As for the power plant in the background, clearly the whole Spinning Jenny theme, with spinning wheels and wires arcing overhead is a metaphor for the high-voltage transmission lines looming over the power plant.  This is a fascinating socialist propaganda artform, combining the traditions of the folk dance and household necessity of spinning with the construction of new power lines and a national power grid.   The spirited celebration of custom is combined with the opening of a new hydro-electric plant, the human energy and artistry of the dancers is illuminated by the gigantic spotlights surging with the electric power of modern technology! This is the point of the row of candles that illuminates the spinners in the opening shot, to show how the burgeoning modernization of the Soviet state is moving from candlepower to Megawatt generators.

All in all, this is an amazing piece of history, when the people were attempting to bury the nightmares of Stalingrad (if not Stalin himself), and move forward into the age of Sputnik and promise of Soviet technology which was at the bleeding edge in many fields, even if those advances had not benefited the population at large.

Notice the much different mood in a dance from at least ten years later (1969):  the troupe kicking up their legs in front of the Conquerors of Space Memorial in Moscow! 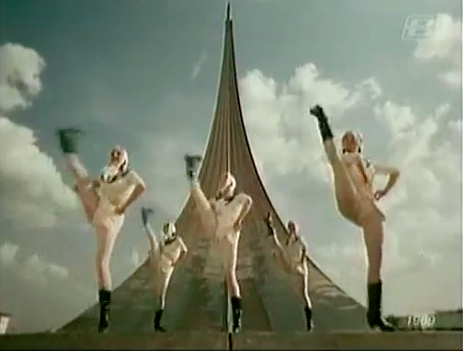 The dancers are wearing revealing white tights and maxi-mini jackets, along with shiny black leather boots.   The enthusiasm is somehow mitigated by the stark geometric background of the Space Memorial, which rises in an arc of titanium up to the small bronze rocket 100m overhead.   This is a stark scene, with the Ostankino Tower in the background, which had been finished in 1967.  There is no crowd of workers, nor any technicians turning mighty spotlights.  At this time there is almost a nervous energy to the production, as if to shout:  hey!  we launched Sputnik in 1957, folks, and have the world’s tallest radio tower… so don’t get too cocky about your Appollo missions, pal!

These two videos make me curious about the later works of this troupe, you can almost read the tea leaves of Soviet history from the artistic directors’ intentions, feeling the heavy hand of the government censor on their shoulders.   And what of the United States?   Well, we just have the psychotic constructs of so-called “famous” performers… our Michael Jacksons, our Brittany Spears, our Justin Biebers.   It is hardly even worth subjecting oneself to that insanity.   No, take my advice and turn off your television.  Find some trees and watch the sunlight change on them.  And happy Holidays!