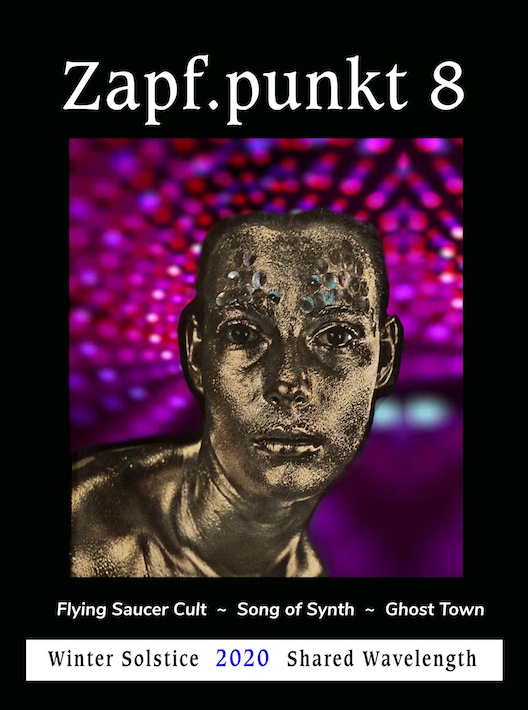 Join us for the lucky eigth issue of Zapf.Punkt. Download your free copy from Diamond Bay Press:

Face facts, the Republican Party is a flying saucer cult!

When I first wrote a review of Alison Lurie’s novel Imaginary Friends it was during the 2008 presidential campaign. That’s when Alan Keyes and Mike Huckabee upheld the Republican tradition of demonstrating how far out and deranged they were. But it was nothing compared to 2012, when I reposted the article during the screaming madness of Rick Santorum and Michele Bachman. Think about it, the roller derby candidate from Alaska, Sarah Palin, was the VP nominee…

Still, in 2012 the bulk of the evangelical wierd Christian vote hadn’t yet merged with Q-Anon and other insane delusionaries, such as people who think 5G broadcasts are spreading the Covid-19 virus. It is patently obvious, at present, that Q-Anon is a psy-op. It was created as an Alternate Reality Game, in which the participants forget what is game, and what is reality.

Seth Abramson posted an interesting thread, where he describes the Trump era as the first reality war in which reality itself becomes an active combat theatre. Delusional people have been steered into the gears of the system and are still robotically trying to tear everything down, rather than admit Trump’s defeat. It’s bizzare and terrifying to watch, and we’re by no means out of the lion’s jaws yet.

After the suburban nightmare of Imaginary Friends, in Zapf.Punkt #8 we head back downtown to reality, for a review of the hallucinatory drug novel by Seb Doubinsky, The Song of Synth.

We watched Ovid.tv and enjoyed it’s mix of new and classic independent documentaries. It was great to stream the 1973 original version of Guy Dubord’s Society of the Spectacle. And we took a journey to the edge of beyond, to review the long documentary, Ghost Town that was filmed in Yunnan Provice of China.

Finally, we recognize the passing of the great Italian editor of Science Fiction and Fantasy, Gianni Montanari.