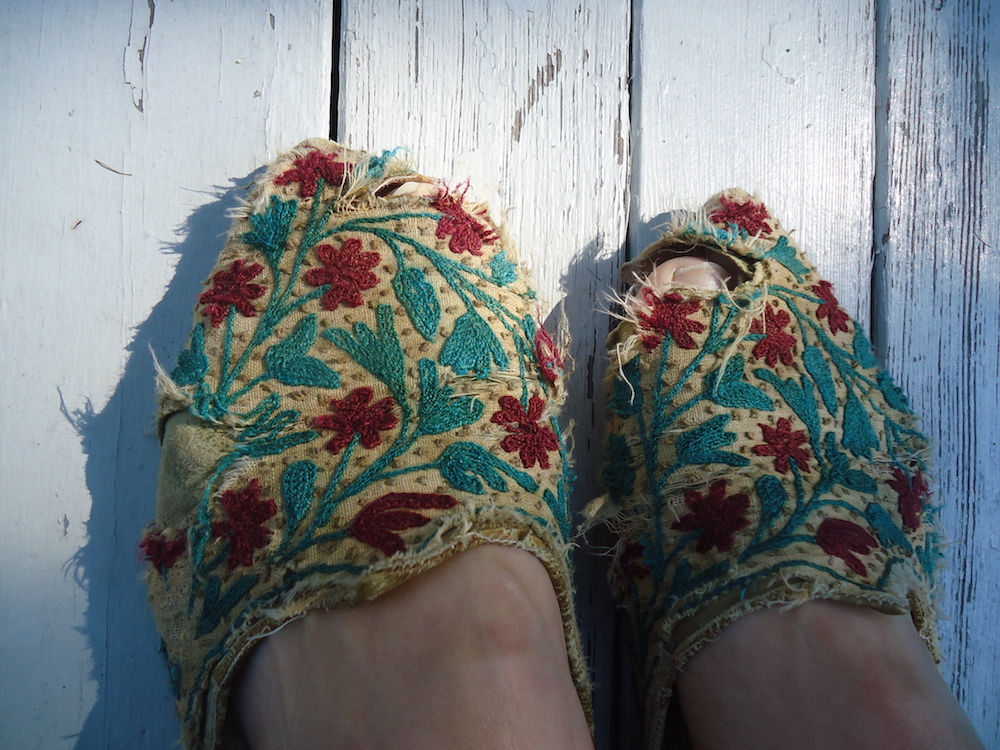 Heinrich Zimmer wrote an interesting psychological interpretation of the classic fable, “Abu Kasem’s Slippers,” collected in his book The King and the Corpse. In that tale, the successful businessman is such a cheapskate that he will not part with his ancient, ragged and disgusting slippers.

In the course of the fable, Abu Kasem is foolish enough to think that someone in the public bath has taken away his worn out slippers and replaced them with a gift: a resplendent new pair of the finest quality. As he walks merrily away in those elegant slippers, he is arrested for having stolen them from the Caliph!

Foolish Kasem! Nobody was granting him a kindness. In fact, they were playing a prank on him by hiding his old and disgusting footwear. In a series of bizarre incidents, Kasem is tormented by the slippers that always return to him, no matter how he tries to rid himself of them. Like a bad penny, those slippers always turn up!

On this equinox of 2018, I am thinking about this tale for many reasons. It has been a 20 year long arc for me, forming the beginning and now (apparently) the end of my professional career. One significance of 1998, is that it was the year I finished my M.A. degree in Chinese language, and also the year I completed a Fulbright Scholarship at Academia Sinica in Taiwan. It was definitely a time of new beginnings, as I worked as an admin assistant at MIT, while at the same time launching my own consulting business.

With a boundless energy, I was able to promote my idea of combining Chinese history, geography, indexing, and databases. Before long, I was being invited to the academic realm, where a ferment to develop digital projects was rampant. Amazingly, I was able to trade in my lifelong anxiety about not knowing where my next meal was coming from, to having actual job offers, first at MIT, then a few years later, at Harvard.

Just before starting my career at Harvard, I also took a vacation to Rajasthan, India, where I visited the magical city of Udaipur, and then spent the night in something equivalent to a dog kennel at the Jain Temple in Ranakpur. After that, it was on to Jodhpur, the mystical blue city spread out below an invulnerable cliff-top castle.

As I wandered around the market square of fabled Jodhpur, choking on dust as thick as New Brunswick fog, I happened upon a shoe shop that must have supplied all the characters in the 1,001 nights. Great golden boats with cresent moons for toes! Flat open-toed sandals with sparse, braided toe holds – they could have been in fashion since the dawn of time. And most fabulous of all: racks and racks of hand-embroidered camel-skin slippers as soft as chamois, and hand-stitched with unbreakable white leather ligatures. The colors were as subtle as lavendar and jasmine. The styles were as primordial as the pyramids.

Without hesitating, I bought a pair that fit me perfectly, decorated with delightful turqoise green plants and their burgundy flowers. 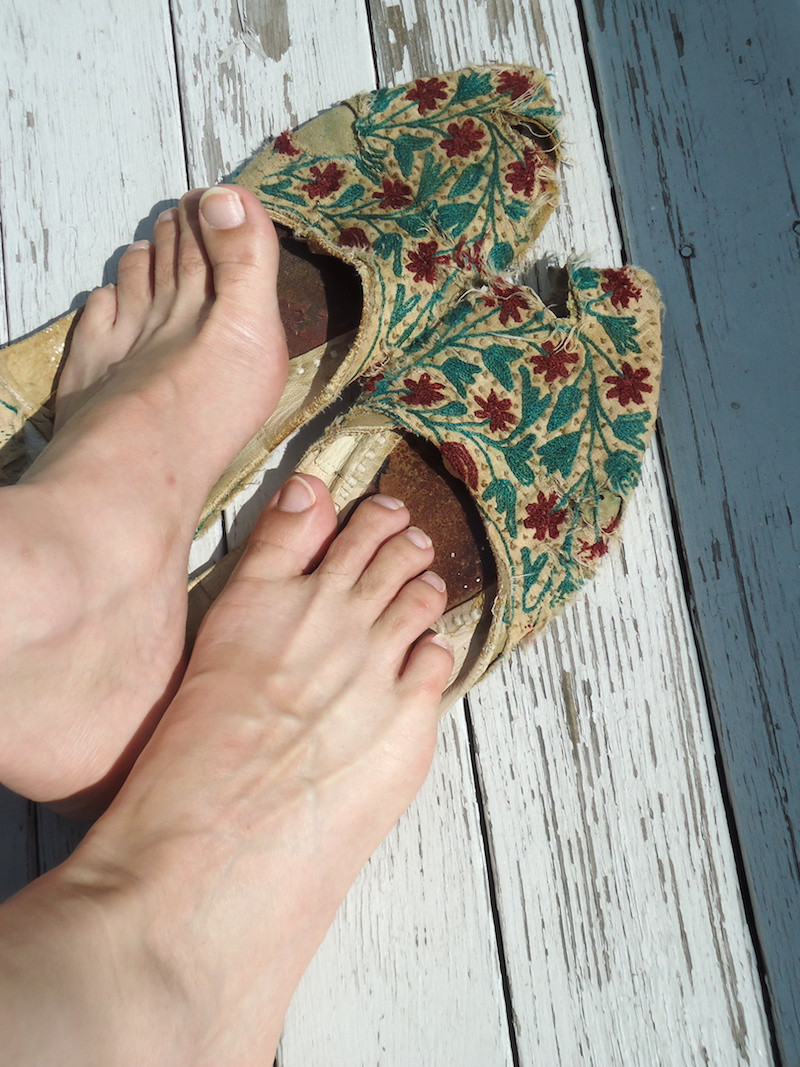 And yet. Here we are. It is 2018, and that long career arc that began 20 years ago has reached its denouement. I’ve ridden that crazy horse as far across the desert as it could go, and finally had to put it out of it’s misery and move on.

Now I’m in a sort of final lap, in a different role at Harvard. The academic appointment I received is certainly an honor. And I was lucky to even have the chance to take that final lap and make it to the finish line.

But my soul is out there wandering. The time has come to molt. Time to shed the last snake-skin and fly away on newly minted blue-scaled wings, searing the landscape with an occasional Godzilla blast of orange hellfire.

It’s been a good journey, but it’s time to ride off into the sunset. It’s time to hang up the Stetson and the six-gun, and get back to the raw land, with nothing but a canteen and a bowie knife.

And yeah, even the slippers must go! The Jodhpur Slippers – bless ‘em – are taking their last tango on the roofbeams, howling their last caterwail at the full moon. If you hang onto something forever, you end up haunting yourself. So time to chuck out what you came to know and trust.

Take the plunge into a totally new realm of existence, where there is neither guide, nor beaten path to follow. But that’s a good thing. No worries. When you wake up transformed, whether you are Gregor Samsa or Sleeping Beauty doesn’t make a bit of difference. The only thing that really matters is to break through the delusional state to your true Identity. On the bakelite surface of the farthest mesa, with volcano rocks and pinon bushes a mile apart, the falling tower of a shattered ego consciousness just crackles like thin glass. There is a vacuum that rises up into the purple depths of the sky. Nothing is there to replace false consciousness with another mask. Nothing is ringing your skull like a bell, demanding another chance. Nope, it’s the last song on the jukebox; a tune that Jason Taverner probably sang to himself just before he remembered who he was and shook off the amnesia.

You can say adios to many things, most of them with good riddance. It’s okay about the Jodhpur Slippers. They served well. They kicked ass in the realm of the gods, and never strayed from the high road. For that you can only be amazed and thankful. 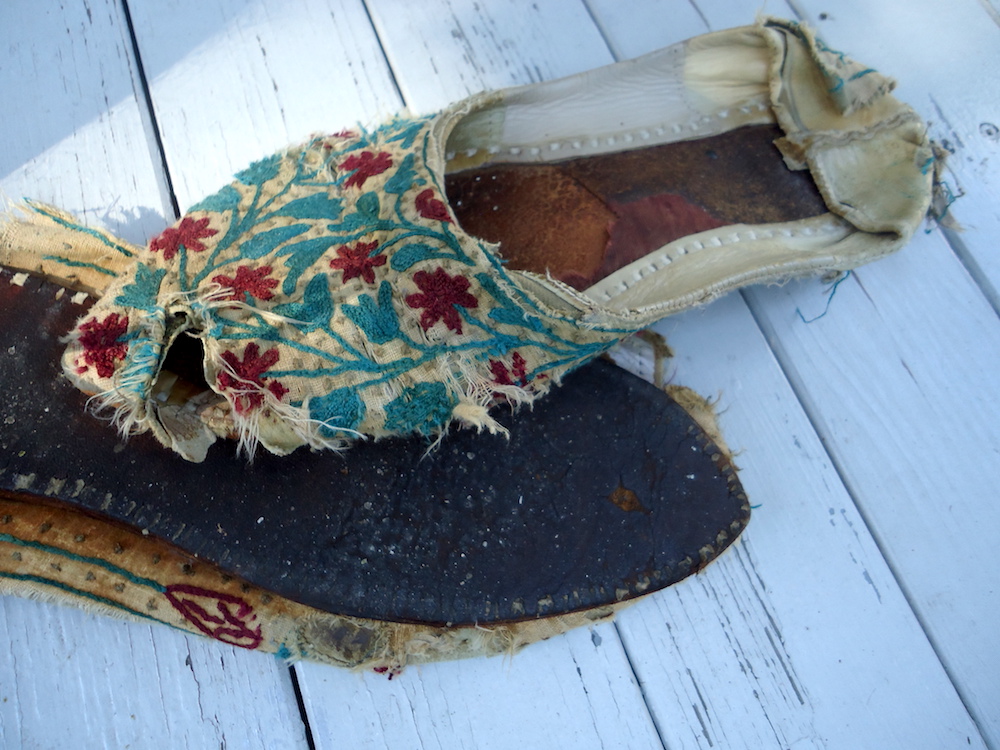