Mastodon Down and Out in Paris and London, Ch. 22 | Yunchtime 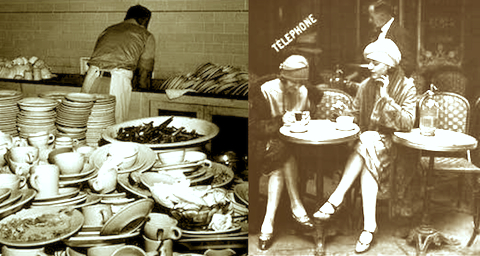 Most of George Orwell’s classic, Down and Out in Paris and London, is a first person account of near-starvation and slaving away as a dishwasher in the bowels of a French hotel.   But there is one section, Chapter 22, which raises the issue of poverty and useless toil to a philosophical level.

Judging from my own useless toil in the sink at the Village Inn, among other venues, I can say the Orwell has certainly framed the problem well, and that not much has changed.   Men and women everywhere must scrub and slave away like serfs, while a disinterested class of wealthier individuals sniff at their plates of nouveau-drizzled crocquettes.   Personally, I do not believe we can eliminate toil from human society, just as much as we are incapable of eliminating the parasitic class.  But I do believe that we could do a better job of spreading the wealth and spreading the burden…what we don’t want is the often-repeated model of raising the standard of living of one class, while pushing the burakumin, untouchable tasks onto some other less fortunate human beings.

Isn’t it time for human society — at long last! — to develop sustainable methods and technologies for our basic needs, and to stop pouring the wealth of nations into bottomless pits of weapons, “intelligence,”  ”security,” and allowing a tiny minority of sociopaths, the King greedheads of the 1%, to suck up all remaining treasure?   Can’t we just try?

By the way, the French quote from Villon (no doubt unintelligible as I have pronounced it) is from the poem La Testament:

which I think means something like “(those who) see bread only through shop windows.”    Which brings to mind the lyric of Bertolt Brecht:  ”Make sure those who are now starving, get proper helpings when we all start carving.”    Sadly, the American society where I live is more insanely obsessed with sporting events and driving their cars in pointless circles, then they are in seeing the simple virtue of making sure that their fellows are not driven by hunger into serfdom.    Let’s fix that!