From the editorial “Communication Between Minds” by Fred Pohl [Worlds of Tomorrow, Nov 1965]

“Reading Vitus Droscher‘s fascinating The Mysterious Senses of Animals (Dutton), when it occurred to us that an experiment Droscher had described could be construed as a proof of telepathy. The experiments in question were performed by von Holst and Jechorek at the Max Planck Institute. The subjects were two chickens, connected by a wire and an amplifier that carried a current from the brain of one chicken to the brain of the other, via stereotaxically implanted electrodes. When the first chicken was exposed to the sight of a dog, the second chicken — completely out of sight and hearing, in another room — fluttered up the wall, squawking in alarm. Not telepathy?”

You’ve got to enjoy Fred Pohl‘s editorials! Not only for his use of a word like “stereotaxically” but also for his crazy hypothesis that amplified currents connecting the brains of two chickens is a suitable proxy for telepathy. I’m quite willing to accept the existence of telepathy, but it has nothing to do with electrodes implanted into anything’s brain…that’s the sort of invasive procedure that psi powers need to avoid, if you ask me.

Even more fascinating was to discover that the chicken-brain experimenter is none other than Erich von Holst, the pioneer of ornithopters! 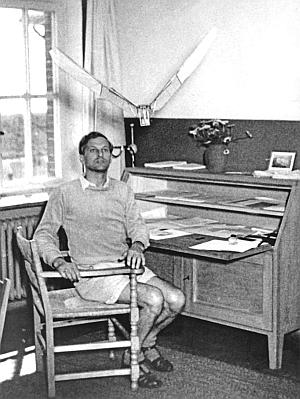 Here’s a great resource on the principles of ornithopter / flapping wing mechanisms.

And a fun animation of the ornithopter in flight.