Reading Clay Shirky’s latest thought-piece on the demise of newspapers poses for all of us the interesting question: what sort of social / professional / technological model will we develop to replace print newspapers when they all go belly up? Shirky makes a pretty solid demonstration of the facts regarding the transition from those inky presses (thrashing out miles of newsprint every morning) to a new paradigm, but he is careful not to speculate too precisely about what form that future paradigm will take. Indeed, the whole point he is making is that we are now living through a revolution in which print media is being overthrown. 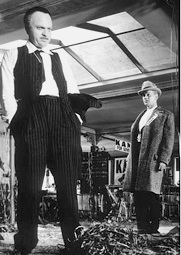 During these last five hundred years, the cost of print production and the profits made on the distribution of printed objects was tightly bound up with dissemination of knowledge, art, technology, and of information of all kinds. Now, with the advent of the Internet and the speedy exchange of digital objects of all kinds, the flawless reproduction of information-laden media objects is no longer bound to the burdens of physical products that must be moved through space. The near-frictionless pathways that our digital infrastructure provides, has creatively destroyed the entire centuries-old paradigm of manufacturing, selling, and regulating the rights for commerce for media such as books, recordings, images, at least in the material manifestions that we have come to know and love.

Now the consumer and the producer are marching ahead, devouring digital objects and frollicking in the waterhose torrent of information that has been unleashed. The terror of the current revolution, naturally, is felt by the capitalist monopolies and syndicates that have built their fortunes on the manufacture and distribution of the old-world “meat media.” The behavior of the RIAA, randomly suing patsies among the 99% of the population that loves to download digital media, is much like the little Dutch Boy with his finger in the dike. From the perspective that Shirky provides they much more pathetic, since at least the Dutch Boy was trying to prevent his whole community from being flooded, while the RIAA are only trying to keep all their ill-gotten wealth from spilling out to the masses.

In any case, back to the interesting question: how can we shape a new and effective model for the practice of journalism and the dissemination of news? The argument about whether bloggers are journalists or whether newspapers are bastions of professionalism is, I think, moot. There are good and bad examples on both sides of the fence. We cannot blame journalists for seeking to work in the only available venue that sustains them…even as we wrinkle our noses at the high percentage of propaganda, disinformation, ridiculous tripe, and outright lies surrounding every decent piece of reporting that actually makes it into print. Similarly, we cannot castigate all bloggers just because some of them are whining fools, or mistake scurrilous gossip for muckraking.

In my view, what we need is a social transformation regarding the production and consumption of news. For example, the idea that Associated Press or Reuters are doing a good job is laughable. They are so completely owned and corrupted by their corporate masters that half of what they send out on the wire directly contradicts the other half. One day you will discover that eating Asparagus will give you gastric ulcers and brain tumors, then the next day you will be told that Asparagus alone will cleanse your body so effectively of toxins that eating it will extend your life by a decade. These, of course, being paid for by the Asparagus Cancer vaccine corporation, and the Asparagus Farmers testing laboratory, respectively. It is obvious to me that what we need are sources of news that have interests more in tune with us; and when I say us, I mean to say us average human beings…mortals who daily go into the world to seek our fortunes and must take what we find for sustenance along with all the other people of planet Earth. I most vehemently do not include the sort of rabid greed-heads who control the corporations, the vicious fang-snapping vermin who pay themselves 165 Million in bonuses with one hand, while grabbing 175 Billion out of the pockets of everyone else! No, we need news that does NOT originate with THEM, and does not kow-tow to THEIR profits above our well-being! So let us keep that straight when we think about where our news should come from and who it is supposed to serve.

If a technical means could be devised - and we are seeing some examples along the lines of DIGG - by which local tidbits of information are posted, then evaluated, then aggregated upwards into an editorial process, I think we would be on the right track. There will be no way to replace the journalist, ultimately, but there need not be a patent claimed on the act of journalism. Members of our own communities can contribute, activists can contribute, as well as academics, analysts, and utterly biased idiots.

What we need is a way for the stories to be aggregated into streams relevant to particular segments of the population. The contamination of peanuts in Georgia warehouses is important to Americans about to consume the peanut butter made from those peanuts, but this news may not be useful to a fisherman on the Goa coast of India. On the other hand, a breached hull of a passing Exxon tanker off the west coast of India would be extremely important to our fisherman!

The crime of the current system, is that AP feeds balderdash into the headlines of every news outlet in the world, and editors — some I know personally to be absolutely prostrate ass-kissers of warmongers — sprinkle this stream of junk with tidbits of possibly salient local items, on the order of “High School girls have car wash.” This is insane.

It is clear to everyone, that newspapers hung themselves by being willing slaves to the highest bidder, just like our government. What we need are more realistic means of channeling info into local > regional > national > global aggregations based on LOCATION, on TIME, and THEMATIC metadata. The people who will end up saving us are not the ham-fisted Mafia of Howard Berman, who would outlaw breathing of air if it could sell more CD’s for Time-Warner, but instead they will be the metadata librarians and the experts of Knowledge Organization Systems. They are the ones who can help us to automatically, stream, sort, and retrieve information streams as they are being generated. A Twitter # hash is not going to work.