Walking down the street this morning I was thinking about how cultural icons evolve over time. For example, the whole Brazilian Copacabana) theme, from Carmen Miranda and her wacky fruit hat, to Chiquita banana commercials, 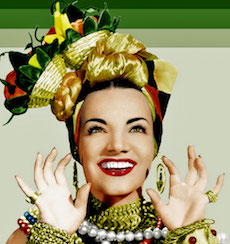 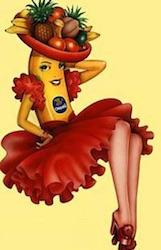 to some sort of totemic Caribbean dancer that still permeates our tiki-laden zeitgeist. (Interesting side-note, even though Copacabana page on Wikipedia has the totemic image, they don’t mention Carmen Miranda!)

Anyway, I was thinking about the idiotic Monkees theme song, which pretty much runs through my head every morning as I walk under the ominous brimstone-reeking edifice of Harvard Law School - in particular the part where Peter Tork is in a wheeled bathtub scrubbing his back with a brush as the other Monkees push him along the street.

And I thought, oh yeah, they just put that in there because they read Mr. Natural comix where Flakey Foont decides to spend the rest of his life in his bathtub.

Eventually Flakey fixes up his tub with a motor and wheels and shows off to Mr. Natural, with predictable consequences! But then it hit me with a tremendous WHAAM!

The Monkees Show was aired from 1966 to 68, at least one year BEFORE Robert Crumb drew the Mr. Natural episode with Flakey Foont’s bathtub escapade (dated 1969)! Ye Gads! Does that mean R. Crumb was recycling images from the Monkees! Then I started to think about it, and this eerie mind-warping sensation of the curvature of time and space took over my wobbling brain… Exactly where do memes begin, and what is their actual trajectory as they are recycled through pop culture? Where does the bathtub thing begin? Even the Cat-In-The-Hat was eating cake in a tub in 1957! A google revealed that there exists nothing less than a bathtub art museum featuring 100 years of bathtub fixations (okay, must be the nudity), and includes some very weird Scandinavians posing with their sport tubs. 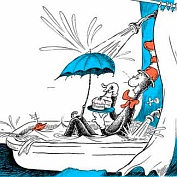 Clearly this is a topic worthy of further study! Should we go back to Diogenes and seek out washbasin allusions throughout history? Perhaps not tonight.

oh lordy, check out this amazing chap in Russia! 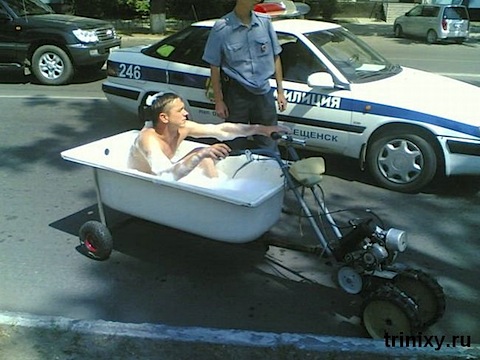