The scientists are pissed. And it’s about goddamn time! Rachel Carson was on this shit back in 1962, with her book, Silent Spring. That was about pesticides, not climate change, but it should have galvanized the scientific community to reorganize around the protection of our biosphere. It should have launched a total rebellion against toxic corporations and systems that placed profit before our own survival on planet Earth.

In 1970 Ron Cobb, one of my all-time favorite cartoonists, published his classic trade paperback, Raw Sewage. That was the first political cartoon book that I ever purchased. No more Spy vs. Spy for me! Cobb was consciously participating as a leading light of the ecology movement. Cobb’s double-barreled graphics blew me away with an environmentalist message every time.

For some inexplicable reason, I was super confident as a teenager that the ecology movement was going to become a standard way of life. My gang of friends were all bicycle-riding hippies. We worked on our organic gardens, and wanted to build passive solar adobe homes. We thought that everyone would bail out on burning fossil fuels, and turn to energy conservation, get back to the land and stop our crazy ways. Hell, even the President, Jimmy Carter, was promoting home insulation and solar power back then.

Nobody expected the Thatcher - Reagan nightmare to swoop down out of the dark clouds, shutting down all the energy research labs, the water monitoring stations of the EPA, and unleashing the dogs of corporate greed who proceeded to savagely consume the planet. Who could have imagined such a total reversal of course? 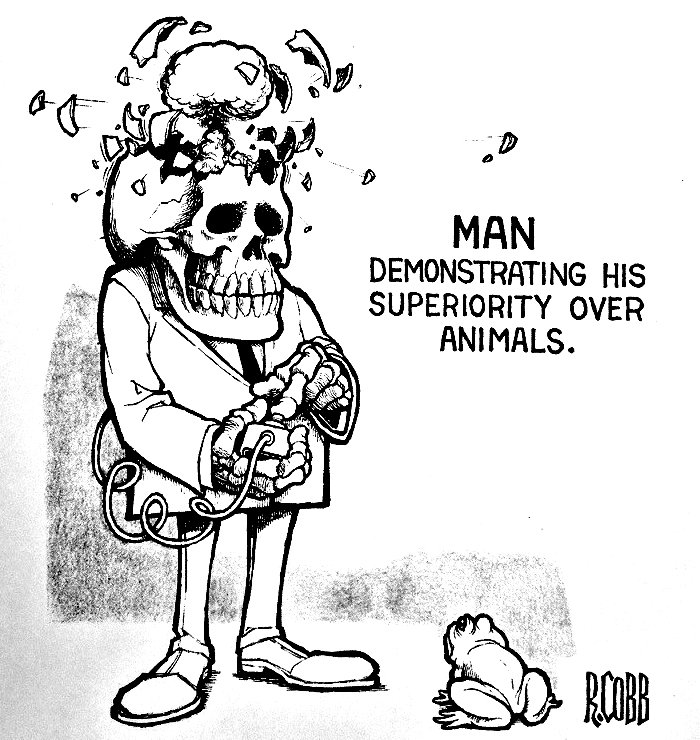 But the scientists knew what was happening as their climate models drifted in an undeniable pattern towards global warming. Shit, Jim Hansen was presenting his models to Congress in 1988! But our corrupt congress, fattened on energy company “campaign contributions,” just sat on their thumbs and allowed corporations to run riot, destroying everything in sight, and they allowed energy companies to shove the absolute dregs of humanity into positions of power. (Looking at you, Manchin, you stinking pile of shit!)

Now, at long last, when the CO2 has already crossed the 450ppm threshold (where it begins to impair our biological functions), we must begin to unwind the absolute mess that has been made of our world.

Sure, scientists, get up and join the scientist rebellion, but more importantly, all of us need to embrace the purpose of the movement, which is to turn science in the direction of protecting and preserving our planetary system. Gaia is going to protect herself, in the long run, brushing us aside like the fleas that we are. But if we – idiot humans – want to survive, we’ve got to get real about the carrying capacity of our cities, and tune into the living systems around us. We’ve got to listen the falling rain and cherish the water cycle, purifying it of the toxic nightmare that corporate industry gives us, with it’s benighted economics of scale. What scale? And for whose benefit?

If an economy of scale lowers costs, it often does so at the expense of natural resources, the intangible inputs that keep them running. But the profits accrue to the monsters who burn down our forests to raise cattle, who pound poisons into the bedrock to crack natural gases loose, most of them escaping to destroy our atmosphere. These are the people who are going to become “green” advocates? Are you kidding me? They have sold out planet earth for their short-term gain, and they’ve got to be overthrown.

That is the scientist rebellion. We must use test tubes and code to tear down the juggernaut that is destroying our chances of survival. We’ve got to replace the greed machine with a planetary consciouseness that works with ecosystems for survival of all species. That’s the new vision we should all adopt.

So, we’re all for it! Get our your banners and megaphones. Don’t let these bastards eat dinner! While the world roasts because of their greedy bullshit, they also expect us to serve them dinner and drinks? No way, Jose.