There are just so many ways for the world to go haywire, aren’t there? And yet, when you boil it down to the broth, there is nothing quite like a global pandemic that really evokes the proper mood.

You get the feeling of doom and apocalypse, don’t you, with a disease spreading across the land? You don’t know where it will strike. Nobody has discovered a suitable defense. All those zombie novels were just primers for this shit.

Nor does it matter what you do, quaratined in your studio space. Like Faust in his laboratory, you may set all the beakers boiling and have all your alchemical tomes stacked up in mountains on your shelves, but it is too little too late. The pest shall come.

In M. John Harrison’s novel, The Floating Gods the plague zone moves vaguely around the city, drawing its hero ever deeper into it’s grip.

Ashlyme, the portrait painter, of whom it had once been said ‘first put his sitter’s soul in the killing bottle, then pinned it out on the canvas for everyone to look at like a broken moth,’ kept a diary. One night he wrote in it.

The plague zone has undergone one of its periodic upheavals and extended it’s boundaries another mile. I would care as little as anyone else up here in the High City, if it were not for Ashley King. Her rooms above the rue Serpolet now fall within its influence. She is already ill. I am not sure what to do.

Well, that says it! Thanks M. John, I knew that someday, the mood would become as real for everyone else as it was for me when I first opened the paperback of The Floating Gods in 1983.

But now, of course, we can communicate instantly with each other using our social networks. We can drop all the heavy emotional trappings that went with telepathy. We can avoid the smell that went with skrying dried up bats on the windowsill. All that stuff we used to do in the old days is History.

Now it’s just a flick of the thumb to send out our thoughts spinning away. They go hooking back and forth into mosaics, creating a density of information unlike anything we’ve had in the past. Our words now hang and float on the current of the ephemeral moment, like some kind of semiotic net thrown onto the waves of speeded up tides. The waves are breaking at two leagues, with an interval of seconds. Do we think that we can catch a squid? Or some montsrous fish from the frenzied sea?

Even so, some comments are more salient, more tangy to the taste, than others.

For example, this comment by The Skeletal Hatter @DrStedx really seemd to get the context.

Hah! What a laugh. And moments later we have Mnuchin (you know he was appointed because someone thought his name was munchkin!) announcing that checks will soon be issued to all Americans. Is this supposed to placate us? A trillion dollars burned by this absurd shell game. Look at the pea! Which walnut shell is the pea under now? Abra cadabra: oops, you lose, labour. Now back to your cage. That’s a good beast. Be calm, you can buy a new trinket in exchange for the bone that we bounce off your head.

And then there was a good one about our new protocol, social distance made easy, which is a weird oxymoron when you think about it.

They hit the nail on the head with number three, eh what? Another personal favorite was the admonition against hoarding. Fortunately the Dutch (we won’t speculate why) have a particular slang word for this pernicious and selfish habit, “to hamster.” And we then have public service announcments to remind us “DO NOT HAMSTER!“

For my own part, I was feeling more aspirational. I am not hoping for a French Revolution – just read Palmer’s Twelve Who Ruled if you still think it’s a good idea – but rather I am somehow convinced that the Universe itself is swimming into a new realm. The alignment of Venus with Uranus that happened on the Super Worm Moon just did something. I’m not sure exactly what it was, but something anyway. I’m feeling as though the wheels are turning and the evil greed-heads with their warmongering bullshit are headed for a fall. At least I am hopeful… aspirational, as I said. 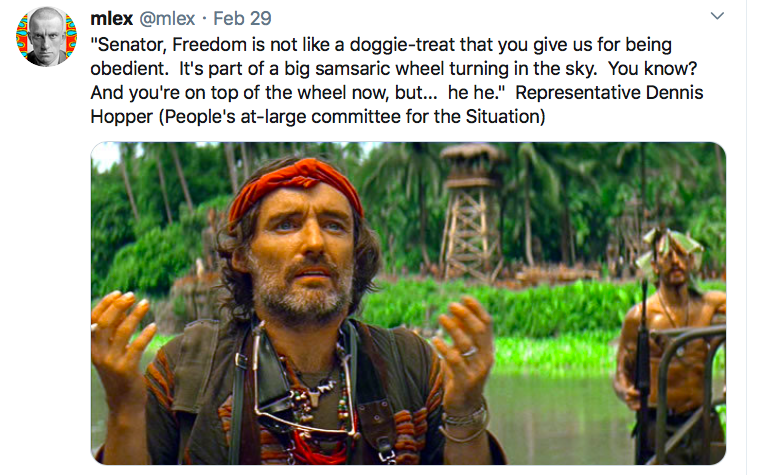