Mastodon Race to the Moon | Yunchtime

For some reason September 2007 is Moon month, or is that an oxymoron? At MIT, the film In the Shadow of the Moon was launched with a free reception and discussion. Ten years in the making, this film promises some amazing high-resolution footage of the Apollo missions that we have never seen before! 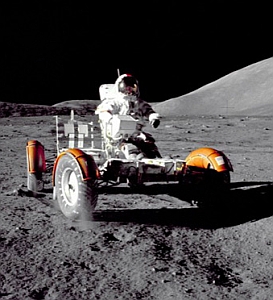 Halfway through the month, Japan has launched a new lunar orbiter, Kaguya, named after a mythical Princess born on the Moon. Is it a coincidence that Kaguya is also one of the most ubiquitous mythical characters to be reincarnated in Japanese Manga? What great cultural cross-over branding! You’ve got the old timers who still think of Kaguya as an obi-belted Princess in a kimono, and you’ve got all the science fiction punks sketching Kaguya as a laser-sword wielding space opera star. Then, of course, you can net all the salary-man types hooked on Kaguya hentai stuff. On the other hand, this was probably just the name suggested by the boss’s secretary, who knows!

Meanwhile, the launch of China’s Chang’e 1 lunar orbiter is just around the corner.

If that is not enough, Google has just announced a $30,000,000 Lunar X Prize to the first private company that can successfully land a robot on the moon! Yes, you read those zeros correctly…so get out your slide-rule and your metal lathe kids, it’s time for you to earn your keep by sending a wise-cracking K-9) bot to luna.

Or is this all some kind of fiendish plot by those Mooninite freaks?