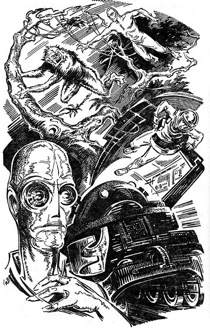 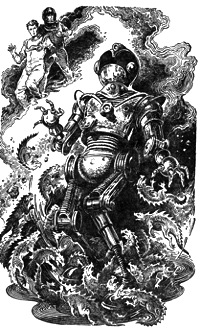 The cool illustrations of Yuri Makarov [Юрий Георгиевич Макаров], featured on Dark Roasted Blend a few years ago, made me wonder who the artist was.   The link to a biography, in Russian, turned out to be an excerpt from an essay published in the Soviet Library of Science Fiction [Библиотека советской фантастики] which was illustrated by Makarov.   Nothing prepared me, however, for the adventures of the artist, especially his career in the military:

Yuri G. Makarov  was born in 1921 at the town of Biisk (in the Altai region) to a very poor peasant family.   After moving from Biisk to Osmk, then to Leningrad, Makarov was fortunate to be accepted into a special program for talented youth at the Leningrad Academy of Fine Arts  in 1935.  He won several awards while studying there, but was expelled from the school for brawling with another student.  For a while he found work at the Hermitage and with a circus troupe, where he performed and painted posters.

Makarov was drafted as an aviator when the war started, but was shot down on his first mission (as a gunner), after which he was sent to the marines, where he was injured again.  After his recovery, he was transferred to the Pacific fleet where he served as naval theatre artist.  Later he also worked under the lend-lease program, flying dangerous missions.  In 1944, he was involved in operation that went down at sea, and spent 40 minutes in freezing waters before being rescued.  He suffered from this for many years and was virtually disabled, although he also went on to serve in Manchuria during the final years of the war.

After his discharge in 1946, he searched for work and again worked for a time as an artist in the theater.   He happened to meet the author Valentin Kataev, who liked his drawings and who commissioned him to illustrate the manuscript of his book “For the Power of the Soviets” published in 1949.  This was Makarov’s first work as a book illustrator.  He went on to illustrate more than 2,000 books, including the “Library of adventure and science fiction” and the “Library of Soviet science fiction”. [link:   Soviet Library of Science Fiction]  ”Библиотека советской фантастики”

What an unlucky career in the military!  Shot down on his first mission, then handed over to the Marines, where he was injured again.  Shipped out to Pacific, then reassigned to lend-lease flights.  Crashed at sea and was picked up, half-frozen from the icy waters, only to be packed off to Manchuria!  No cushy sinecure in those mountains, either.   Quite a life!

Not to mention one of the most prolific illustrators of Soviet era SF books!