Watching the Republicans flail around in psychotic convulsions at the CPAC finally seemed to have convinced some Americans of what I have observed for most of my life, namely that the GOP is the party of the criminally insane.  The recent bile-spewings of Rush Limbaugh and Alan Keyes, are nothing new.  It is rather sick to watch, though, as if we are viewing the inside workings of a really lunatic fringe cult, played out live on national t.v.

There are more than a few sociological parallels to the cult that figures in the book I just finished, _Imaginary Friends_ (1967), by Alison Lurie. 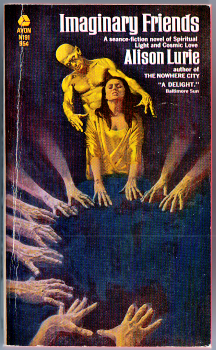 In this very straightforward story, we are brought into the small upstate New York town of Sophis, where two researchers from the University have embedded themselves into a “flying saucer cult.”  The young Associate Professor, fresh out of Columbia University, acts as the narrator, assisting the gruff senior Professor on his study of group dynamics among cult members.  While the researchers take notes about the body language and interactions of the group, the cult members carry on in their belief that beings of light are descending to Earth from the planet Varna, and are whipped into frenzies of anticipation by the over-ripe teenager, Verena, who falls into trances and produces automatic writing messages from their alien contact, Ro of Varna.  While the story advances in slow, methodical fashion, it occasionally hits on deeper truths:

“Apparently, although people like to hear that they and the Universe are good and getting better all the time, they like even more to be told that they are wicked sinners in a dark pit, and can only be saved through great effort, the repetition of magic formulae, and the aid of invisible beings.”

As the researchers get more deeply involved with the highly anticipated Coming of the aliens, the narrator begins to question his motivations, and finds himself taking on the persona of the cult to such an extent that he questions his own sanity.  The principal investigator, on the other hand, is completely self-assured about the purpose of the research.  No matter what tactic he takes to keep the ball rolling, no matter how enmeshed in the whole cult philosophy he gets, he never questions his own mental state.

Don’t these two characters reflect most of us in America today?   Either numbed into shell-shock by the total insanity that has been foisted on us as “terror,” which was basically a lie; or blindly waving flags to “support our troops” with pit-bull belligerence.

We were forced to watch our government create offshore concentration camps, and told to look the other way as agents put black bags over peoples heads then renditioned them away to be tortured…all as if things were “under control.”   Of course, it turns out that what they actually were planning was martial law, absolute fascism, the Gestapo, to bring the gloved fist of the secret government out into the open and to smash anyone who dared to complain.   During this time the media simply repeated every line of bogus bullshit that came out of the White House, slavishly drinking the kool-aid like the lap dogs they really are.

Most of us are left to question our own sanity.   Can this total delusion be real? Can people actually live with themselves when the cognitive dissonance of our so-called leader class is diametrically opposed to the reality we can see with our own eyes?  And yet, there are some, apparently, who feel completely confident and assured that what they are doing is right - even as they are marching straight into the ovens! Yes, the old Professor with his Imaginary Friends, the CPAC, Richard Perle claiming he is not a neo-conservative!   Why not just say white is black, hot is cold, and repeat it through the New York Times and the Washington Post every day for eight years.  That solves everything!

Alison Lurie’s book is slow-paced and dry at times, but painstakingly accurate.  The portrait of small town America is vivid and reminds us of where such innocent belief systems formed, then festered, and finally came virulently out into the mainstream of American politics. It’s a strange book, with a sort of cynical and yet sensitive tone, reminding me strangely enough of Steve Gerber’s Howard the Duck, in which an outsider is plunged without warning into a world of nut-cases and then has to wade through all of their neuroses.  Whether she meant to or not, Lurie paints an eerie picture for us, of lonely souls grasping for meaning in their empty lives…so desparate in their belief system that reality, facts, truth, and common sense are readily dispensed with.  And the moral of the story is that once you have lured a group of idiots into the echo chamber, it no longer matters what happens in the real world around them, they will cling to their ideologies all the more strongly.   Like the Fundamentalist said to Louis Theroux when challenged with the fact of human evoloution, “I ain’t from no monkey, buddy!“