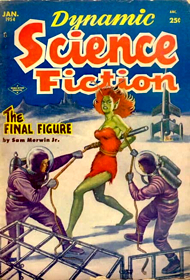 The first paintings by Milton Luros that I remember seeing featured beautiful women, rendered with a soft, almost flat touch. For some reason the image of a green-skinned Amazon, struggling in bondage as two human spacemen try to drag her into a cage always sticks in my mind. With a light touch, the artist shaped her glamorous lipstick into a snarl of defiance that would make Betty & Veronica proud, and he framed her pointed ears and antennae with a wild mane of red hair. Plus, you’ve got to give those wild alien women credit for their fashion sense - who wouldn’t kill for that strapless red shag mini-dress! 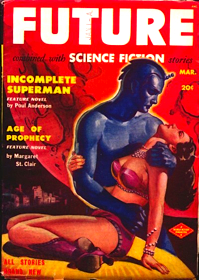 Then there was the cracking good composition of a woman fainting in the embrace of a blue-skinned alien man, framed against a vivid red planet. Unlike the previous image, this is very much a loving embrace, the woman’s hand is delicately twined around our blue-skinned superman’s bicep, while his figure is framed by a simple white backlight for dramatic effect. This image is iconic, like some sort of Gone With the Wind in outer space.

the intersection between science fiction illustration, fandom, porn, and obscenity trials, that was personified in the career of Milton Luros and his various publishing companies. Probably the best articles on this unlikely cultural stew are by Victor Banis, Paperback Virgin and Tony Jacobs, The Luros Skin Magazines, both of which appear in Earl Kemp’s amazing eI zine. (Note: neither of these articles is Safe for Office Viewing.) The actual findings of the trial, in which Luros’ “nudist” magazines were eventually found to be neither obscene nor prurient (for the time being), is fascinating reading all by itself, and was a landmark case in 1968 that paved the way for many other publishers.

But let’s go back to Luros’ artwork. 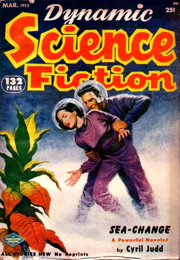 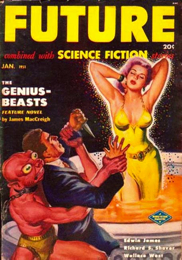 Many of the covers feature some sort of struggles or embraces at close quarters. A man and woman in tight-fitting air helmets are shown in a misty landscape. It is hard to tell if the man is restraining her, or helping her not to faint. On another cover a red-skinned alien (with a metal collar and chain around his neck) wrestles with a man who is brandishing a dagger. They are battling in the shining presence of a glamorous woman, whose arms are stretched up behind her neck in a languorous pose, exposing her swaying breasts in a racy gown. With heavy eyes closed in casual disregard, the woman’s figure is surrounded by Luros’ characteristic white backlight, around which a cascade of colors drift down like droplets of mist. Clearly, it is the man who is after her with the dagger, while the alien troll is preventing him from getting closer to her pool of golden waters. 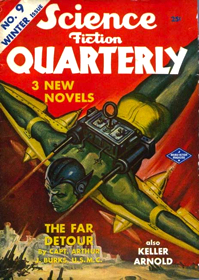 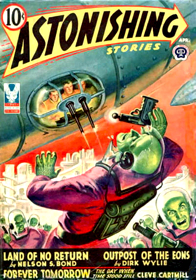 In two covers from the early 1940s, there are no glamorous women, but both feature aerial combat, which is easy to understand in the midst of WWII, and only five years since the Luftwaffe decimated Guernica. One cover shows a green man strapped to a personal sized turbo propeller wing, with guns blasting over each shoulder. The simple edges and shapes are reminiscent of James Allen St. John, and here the white backlight is reserved as an accent for the facial features. Another painting from roughly the same time uses the white backlight as the horizon, in between a human operated airship that is firing down from the orange sky, onto a field of bald, green-faced aliens. The central figure, an alien being struck by enemy fire, with his space helmet shattered and his pistol suspended in stop-action before his upthrust hand is gorgeously rendered. The front of his body is framed in the harsh white light, and his purple suit blends round his back into red, but is covered (very unrealistically) by his backpack, which seems to be lit in a completely different manner. For some reason the wacky play of light sources in this painting, which are not possible in the real world, work perfectly in the realm of the imagination. 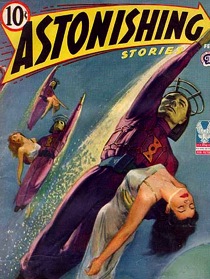 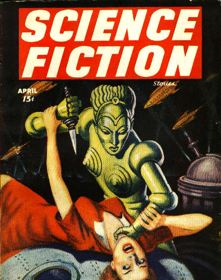 Among these early images is another painting of a dark-haired woman fainting in the arms of an alien. In this case, the woman is relaxed, unconscious, her generous figure draped in a silk nightgown. Her captor, a purple suited alien, is sporting a dutch-boy hair attachment and sort of radio antenna on his head, while flying skyward into outer space. The backlight here is seen as a supersonic vapor trail, and white glow behind the alien’s face. But our alien is not alone. His colleagues are zooming away with their own women (who have blonde and chestnut hair, so that we know this is a mass ascension of alien kidnappers and not some trick with mirrors!) The beauty of this painting by Luros is in the simplicity of the image and the effect that is achieved with economy of details. The alien’s hands are barely rendered darts, while the sleeping woman’s face and hair are as perfect as a cosmetic ad.

Perhaps the most dramatic of Luros’ early covers is one depicting a greenish female robot, raising a dagger to strike at a struggling woman in a red dress. Rivets line the temples of metallic woman, whose aquiline features, high cheekbones and almond eyes are accented by a weird Babylonian hairstyle and jutting metal cones for breasts. By contrast, her victim is an ordinary looking woman, her shape concealed by a lumpy dress, her scream being choked by the iron grip on her throat, and her hair disappearing beyond the edge of the canvas. Here the sky is black, with faint beams of searchlights sweeping the distant darkness for symmetrical streams of invading spacecraft. The highlight is boldly framing the robot attacker (but not her victim), and Luros once again shows how deftly he can warp reality to serve the needs of his imagery.