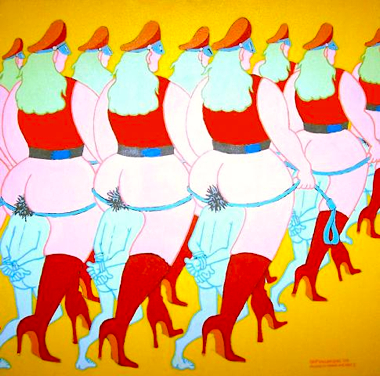 While randomly grazing the sweet grass of the intertubes, and reading about such things as the Comic Salon Erlangen and looking at Andy Konky Kru’s photos of the 2006 Salon, I stumbled across Skip Williamson’s blog on the history of Underground Comics. [Sadly the blog is defunct, after 2015].

Not only did this remind me of my first major comic book convention (at the Playboy Towers in Chicago) where I met Skip Williamson, but also of Skip’s terrific “Class War Comix,” published about five years later in Snappy Sammy Smoot (1979). In addition to the classic newstand headline: Agnew Breaks Wind, Thousands Die! this comic featured a paranoid schizophrenic Richard Nixon being replaced as President by an even more freaked out long-haired capitalist, Amphetamine Arnie.

In his new essay, Skip provides some great background material on the E.C. Comics vs. Fred Wertham period of suppression, and the Kurtzman - Help era that subsequently inspired rebellious cartoonists everywhere. Skip begins and ends his excellent piece with thoughts on freedom and liberty:

When the Underground Comix movement initially detonated it was asking the didactically loaded question, “Do you really mean Freedom of the Press?” This was a group of artists, working without economic expectation, expressing art without society’s polite restraints, while employing an intrinsically American cultural curiosity, the Comic Book, as its delivery system.

Indeed, the necessity of the Underground is felt even more keenly after living through the wannabe fascist hell of the Bush-Cheney junta. We need not remind ourselves that freedom is an act of affirmation about being alive, and not an act of begging after the table-scraps left to us by our masters. John Stuart Mill **understood this perfectly:

The only freedom which deserves the name, is that of pursuing our own good in our own way, so long as we do not attempt to deprive others of theirs, or impede their efforts to obtain it. Each is the proper guardian of his own health, whether bodily, or mental and spiritual. Mankind are greater gainers by suffering each other to live as seems good to themselves, than by compelling each to live as seems good to the rest.

Therefore we should be forever on our guard against those who, proclaiming freedom, are swinging tasers and handcuffs or who walking around with stacks of Bibles and tweaker-crazed eyes. Let us remember not only the WORDS of the great Rev. Martin Luther King, but also the MEANING of them when he said LET FREEDOM RING!

As for the revisionists of the extreme right, claiming they are not neo-cons, claiming to believe in the Constitution (even as they shred it and enable torture!)… aren’t they pushing the limits of reverse irony a little too far? Or are they actually ignorant of what ridiculous jackasses they make of themselves, with their teabagging parties? Well, it doesn’t matter, thank the stars! Because the obsolescence of the greed-heads is now accelerating faster than Moore’s Law… and good riddance to those uptight traitors!

Let’s forget about them and celebrate the weirdness and creativity of being free! On that note, check out these unintentionally psychedelic tapes of Vaughn Bode at the drawing table - video relics from Toronto Comicon 1974 that I found while looking for info on Chicago Comicon of the same year: 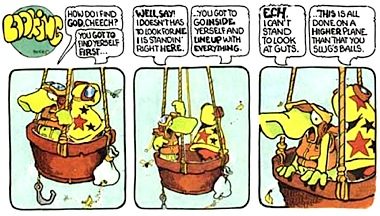