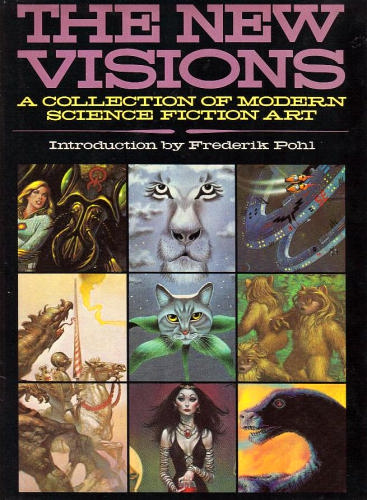 Just received a copy of _The New Visions, A Collection of Modern Science Fiction Art_ published in 1981. I was was surprised and delighted to find one of the 23 artists featured to be Carlos Ochagavia, and to see not only his self-portrait sketch (below), but also his amazing SF Book Club edition cover painting for Niven and Barnes book, Dream Park. 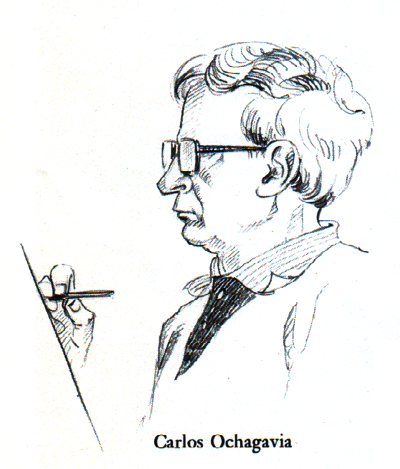 In Ochagavia’s painting (below the fold), what a fantastic and amusingly surreal dragon the anonymous hero is fighting! 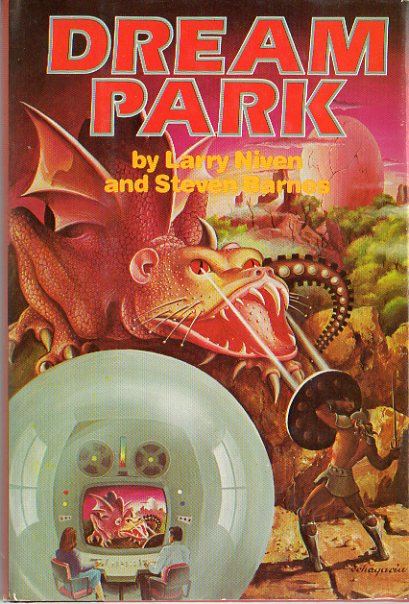 Unlike most dragons — that belch shafts of castle-rending fire — this dragon seems to have a big strawberry for a tongue, and merely emits some flash-beams of white light from its eyeballs, while lazily flipping a tail that looks something like an octopus tentacle on a railroad track. The dragon’s pose is no more menacing than a self-hypnotized tabby cat sitting on the sofa, and his goofy whiskers could easily pass for those of an old catfish.

The gorgeously rendered background evokes medieval and Flemish masters, with a Boschian eggshell sitting majestically behind an old cairn and a lush, mist-filled forest. As if this brilliant scene was not enough, Ochagavia has rendered it all AGAIN in miniature, on the screen of a laboratory, which itself is painted with soft, silvery, inner-spherical perspective. Surely the original painting of this still exists somewhere! How I would like to see it someday!

The Illuminatus Mystery of Carlos Victor

The Surreal Art of Carlos Ochagavia